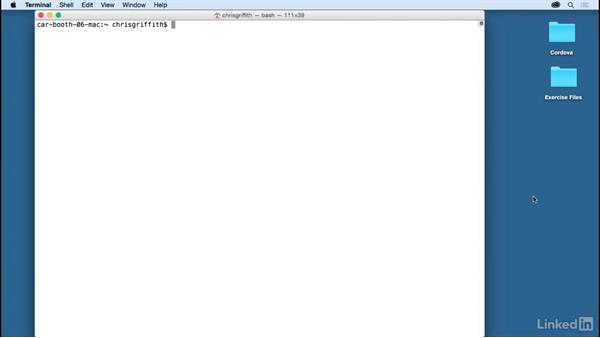 Chris Griffith shows you the basic Apache Cordova build command to actually build your mobile application for testing on either the platform's emulator or on a physical device.

- [Voiceover] Now with our app copied into our…Cordova working directory,…as well as understanding a big xml file.…Let's actually try to build this up.…Cordova gives us two methods to build our app.…The first is to simply use the Cordova build command.…This command will build for all of the install platforms.…If we only wanna target one platform,…we can use the command…cordova build,…and then the platform name, say IOS.…However, the Cordova build command…is actually shorthand for two other Cordova commands,…prepare and compile.…

The prepare command will copy the www folder…into the specific platform directories…while the compile command…does the actual compile process.…So, if we wanted a little more control in our…build process,…we can actually use these commands…and use them in conjunction with that hooks directory…to do something that we might need to do.…We're not gonna touch anything in the hooks directory,…but I just wanna let you know how those parts work together.…So, let's move onto building our application for…