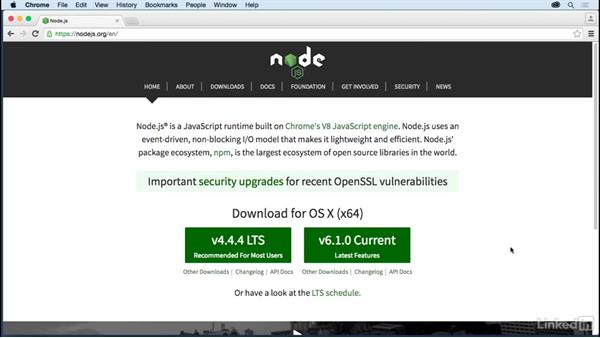 Both the Apache Cordova CLI and the PhoneGap CLI are built atop nodejs. Chris Griffith shows you how to quickly install this popular tool

- [Voiceover] The Cordova CLI is built using Node.js.…This allows users a fast method…to bootstrap your Cordova applications.…Compile and run their applications…using the locally installed SDKs.…So, the first requirement for this course, we're using CLI,…is we're gonna need to have Node.js installed.…This process will vary from platform to platform,…and you can download the correct installer from nodejs.org.…You'll wanna use the 4.4.x version at this time.…

The newer versions, sometimes,…may have some incompatibilities…with some of the additional modules.…If you have an additional need to use a later version,…for example, you might wanna look at using something…like the Node Version Manager,…which will allow you to switch between Node versions…on your machine.…I'm gonna go ahead and click the Download.…The package is installed.…I will now go ahead and open it,…and install this on my computer in the default location.…Read the terms.…

Enter my password.…And Node.js now successfully installed on our computer.…