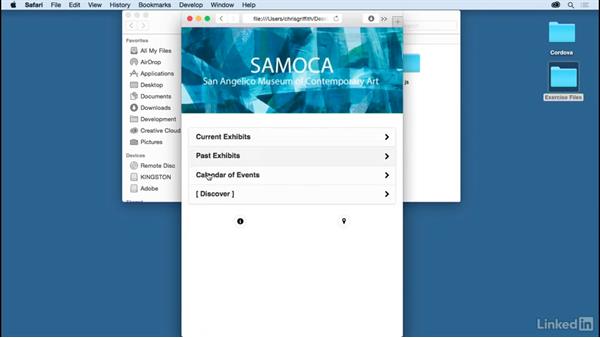 Chris Griffith walks you through the supplied prototype mobile application used in the course. He gives you an overview of the various screens and an understanding of the files.

We have a config.xml, a resources directory…which contains all our app icons and splash screens,…and then our WWW folder.…Let's go ahead and take a look at this.…So in here, we have a CSS directory,…an Images directory, and a JavaScript directory.…Let's go ahead and open up the index.html…within our local browser.…Our application is a prototype of a mobile visitor's guide…for the fictional San Angelico Museum of Contemporary Arts.…The SAMOCA app only has a few screens built out.…

From the home screen we can navigate to Current Exhibits.…We can look at Past Exhibits,…