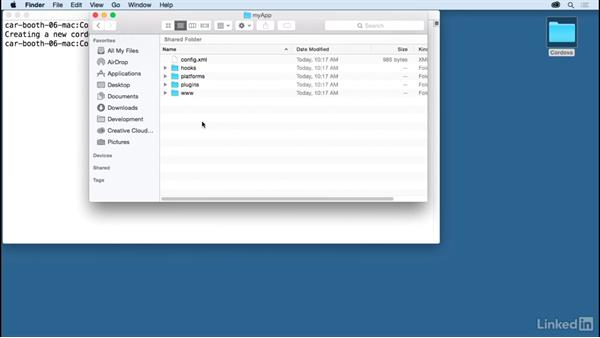 Understand the folders and files that are created by the Apache Cordova CLI's create command. Chris Griffith explains what the hooks, platform, plugins, and www directories are, as well as the config.xml file role.

- [Voiceover] So let's go take a look at what the…Cordova create command generated.…We're gonna open the directory; we see the "MyApp" directory…that was created within the projects folder,…and then we'll open this up.…So, within this directory, we see…four additional directories and one file.…Let's go over each of these briefly.…The hooks directory provides a place for us to modify…the actual CLI build process with custom instructions.…The platform directory is where each platform's build files…will be created.…

Currently, this is empty since we have…not defined any platforms that we are…going to be building for.…The plug-in directory is where the specific Cordova…plug-ins will be installed for use by our application.…We'll explore plug-ins in a later video.…The final directory is the "www" folder.…The Cordova CLI places a sample application here.…In fact, let's take a look.…Most of your active development…will be within this folder. Here, we find the…index HTML file that will be used to start…your Cordova application. And if we move back up,…