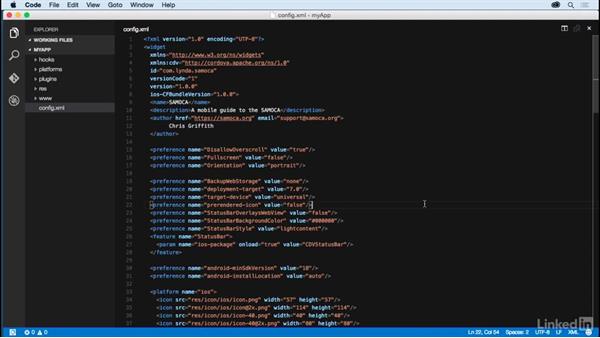 Chris Griffith demonstrates the various application settings that you can define in the config.xml file, including controlling the application's display orientation. He also shows how to disable the rubber band effect during scrolling. Learn how to contro

- [Voiceover] Now, let's look at a few global preferences…that will be applied to all the platforms…we want to support.…Now, if we look at lines 15, 16, and 17,…we'll see them here;…but first, is the DisallowOverscroll preference.…Now, typically when a user scrolls to the top…or bottom of a web page,…the Mobile LS will give some kind…of visual feedback saying they've reached that end.…We can disable that by setting this value.…Next, we can also set whether…or not we want this application to be in full-screen,…or show the status bar.…