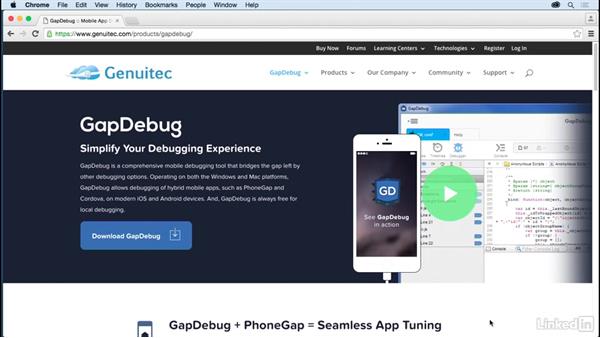 GapDebug is a third party solution from Genuitec. Chris Griffith introduces this solution as a debugging option for PhoneGap Build developers. He highlights that it can allow iOS debugging from Windows based machines.

- [Voiceover] One last tool I just wanted to…bring to your attention is a tool called GapDebug.…Now, this tool is available for both Mac and Windows,…and the advantage here…is it allows for Windows developers…to debug, through this tool, iOS applications,…something they can't do…since Safari is not supported on the Windows platform.…It's a nice tool,…it's a nice other option to take a look at…and keep around in case you need it.…So there you have it,…three different options for debugging…your hybrid applications on device with your computer,…helping you squish out those nasty bugs.…

All right, let's keep moving on.…