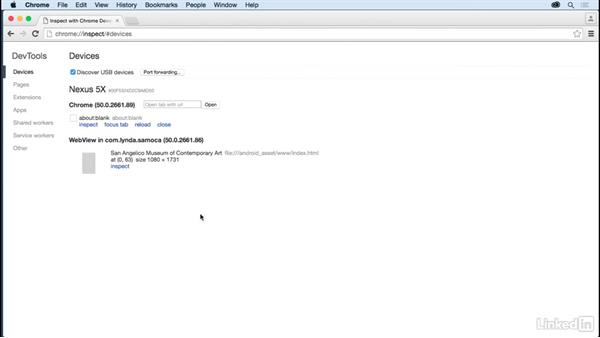 Learn how to leverage Google Chrome's Remote Inspection feature to debug your Android applications. Chris Griffith demonstrates the inspector's functions, from viewing the DOM, the JavaScript console, and the CSS inspector. This is Chrome Dev tools, but f

- [Voiceover] Unfortunately, there will come a time…when you will need to debug your application…on an actual device.…There are actually several methods to do this.…Since this is a hybrid application,…we can use a variety of web inspectors to do this.…For Android, we can leverage…Chrome's remote debugging features.…If you've done any web development,…you're probably familiar with Chrome's dev tools.…If not, visit developer.chrome.com/devtools to learn more.…With your Android device connected via USB cable,…open Chrome on your computer.…

In the address bar, enter chrome://inspect.…Confirm that the discover USB devices is checked.…Your device will probably prompt you to allow…USB debugging from your computer.…Tap OK.…I would recommend also enabling…always allow from this computer.…Now, I've already went ahead…and launched the SAMOCA app…and we now see it listed as an option here…on our Chrome on our desktop.…So, go ahead and click the inspect option…and a new window will open.…

So here we have a preview of our app…within a mobile phone factor.…