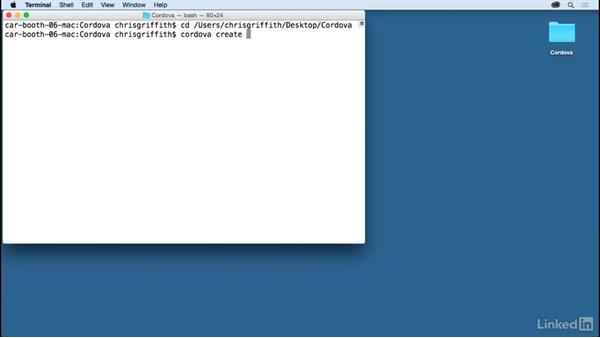 Chris Griffith shows you the cordova create command. He talks about the various parameters that can be included like app name, and the app id values.

- [Voiceover] Before we begin using the CLI,…I'm gonna create a folder in my desktop that I will use…for this course.…I'm just gonna call it Cordova…and set it right there.…Now, I need to change my working directory…to this newly created folder,…so I'll go cd, you can just drag that folder in there…to get the full path nice and quickly.…With my working directory set,…I can now use the Cordova CLI…to generate the initial framework for our application.…To generate a Cordova app using the CLI,…we evoke the Create command.…

There are several parameters we can pass into this method.…Let's go ahead and say…cordova create.…The first is the name of the project directory.…This directory will be created within our working…directory, and it will house all of our resources,…platform-specific elements,…and other items.…Let's just call it myApp.…The next parameter is the App Id.…This value is usually a reverse domain style identifier,…like com.lynda. Say cordova CLI demo.…

Let's make this a little wider…so we can see it all on one line.…