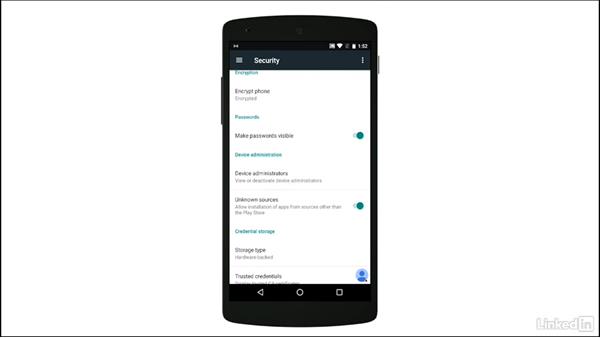 Chris Griffith shows what you need to do in order to have a development ready Android device capable of running PhoneGap Build applications. Learn how to unlock your Android phone to enable its developer mode.

- [Voiceover] To enable your Android device for development requires just a few simple steps. Google takes a very different approach to unlocking your device for development purposes from Apple or Mircrosoft. Android allows you to install and run applications that have not been digitally signed for public release. But in order to do so, we must first enable the setting on our device. As you can expect, this setting is turned off by default. Now, since there are so many different versions of Android devices and versions of Android OS the exact instructions might be different for your device.

Go to the settings application and then select the security menu. One of the choices on the screen should be an ability to enable installation of apps from unknown sources. We need to enable this in order to load our applications onto the device. With this setting enabled, we are now ready for Android development. That's it. We can now install and run any application on our device. Just be careful. This means you could download and run applications that could be potentially harmful.

Now this security setting might be located in a different menu, depending on your device's manufactured version of Android. If you're having trouble locating it, I would suggest doing a quick online search. Now the apps that the Cordova CLI complies for Android are actually signed initially using a debugged key. Since we're configuring our device for development, we can also enable the USB debugging feature in Android. Although this is not needed to run our applications, it is very helpful during the actual development process.

To enable USB debugging, we'll need to go into the settings application again. And select the about item. Scroll down and you should see the software information or the build information. Now, tap it seven times. And once you've done this, a toast will appear informing you you have unlocked the developer options for your device. Return back to the top level of the settings application and you should now see a developer options listed under the system list. Go ahead and select it and then select the options to enable USB debugging.

This will allow us to perform some on-device debugging. So with a few simple taps, we have enabled our Android device to be ready for our Cordova CLI-generated applications.