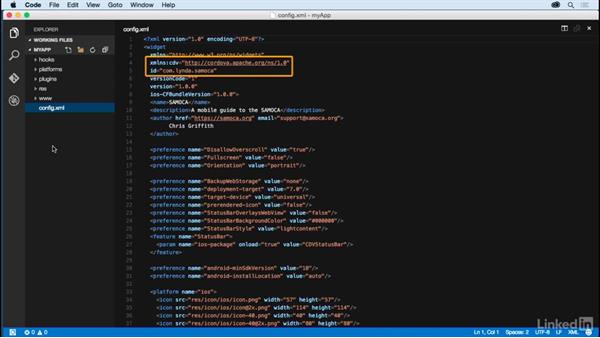 Chris Griffith explores creating the complex confgi.xml file. which is used by Apache Cordova to define the various settings by each platform's compilers.This is often one of the hardest tasks that user of Cordova and PhoneGap have to perform.

- [Voiceover] Before we dive in and actually…build this Samoca app,…there's a few things we need to do first.…So, within your exercise files,…lets go ahead into chapter six,…into our sample app.…Now, in our cordova directory, we have our myApp,…go on there, and what we're gonna do is we're actually…going to replace the config.xml file,…we're gonna replace the entire www directory,…and we're also going to add in this new resource directory…into our application.…Select those, drag those across,…and apply all, replace.…

So the first thing I actually want to take a look at…is this config.xml file.…Now, rather than having you type all these things out,…