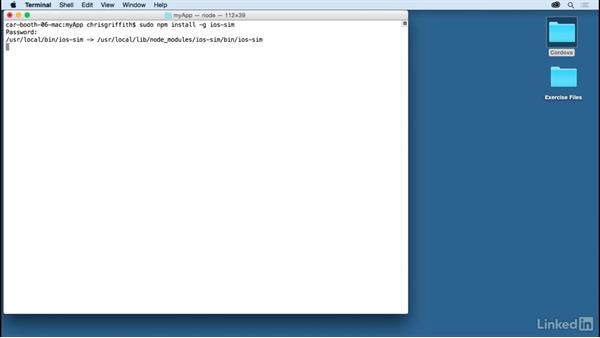 Learn the additional requirements needed to use the Apache Cordova CLI to run your iOS based application in the iOS simulator or to have it automatically deployed to your iPhone or iPad.

- [Voiceover] Now its time to see the sample application,…both in an emulator and on an actual device.…Let's look at the Cordova CLI commands to do this.…In the last video we used the Cordova Build iOS…and the Cordova Build Android commands as a way…to build our application.…Let's go ahead and run them again.…Cordova build I-O-S.…The process will run, and if we actually…go into our actual directory, inside platforms,…I-O-S, build, and say emulator,…we can actually see the outputted…applications that we could run…either in the emulator or on our device.…

Do the same thing for Android, Cordova, build,…Android, and the CLI will now run through,…generate our Android application, and if…we go in, again look at platforms, Android,…build, outputs, A-P-K, we can see…we have built debut apk's that…we can now install onto our device.…But, rather than having to navigate to…all these folders and manually install our app…each and every time we build, instead we can use…either the run command or the emulate command,…depending on which environment I wish to target.…