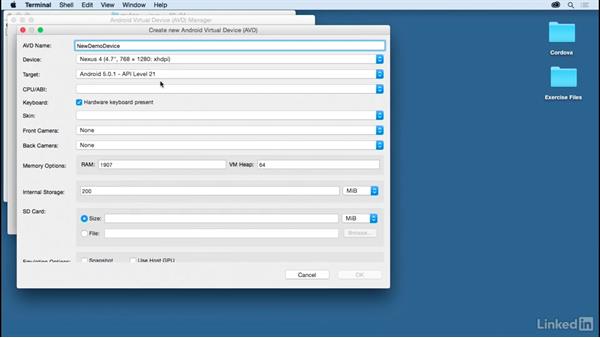 Chris Griffith shows you the steps needed to build and deploy your Android-based applications in either the default Android emulator or on an actual Android device. He also talks about a third party alternative, Genymotion, to reduce the build/deploy cycl

But let's take a moment and talk…about the emulators a little bit.…Before you can actually use one of the Android emulators,…we actually have to configure them.…To do this, we'll use something in the command line.…We're gonna say,…Android…A-V-D.…And that stands for Android Virtual Device Manager.…I've already configured one here.…I've set it to be…a target of the four dot four dot two…platform in the Akai level…as well as the CPU.…You can create as many virtual devices as you want,…so do so,…just hit create.…

This dialogue will come up.…Simply work your way through all the various parameters…and build something.…