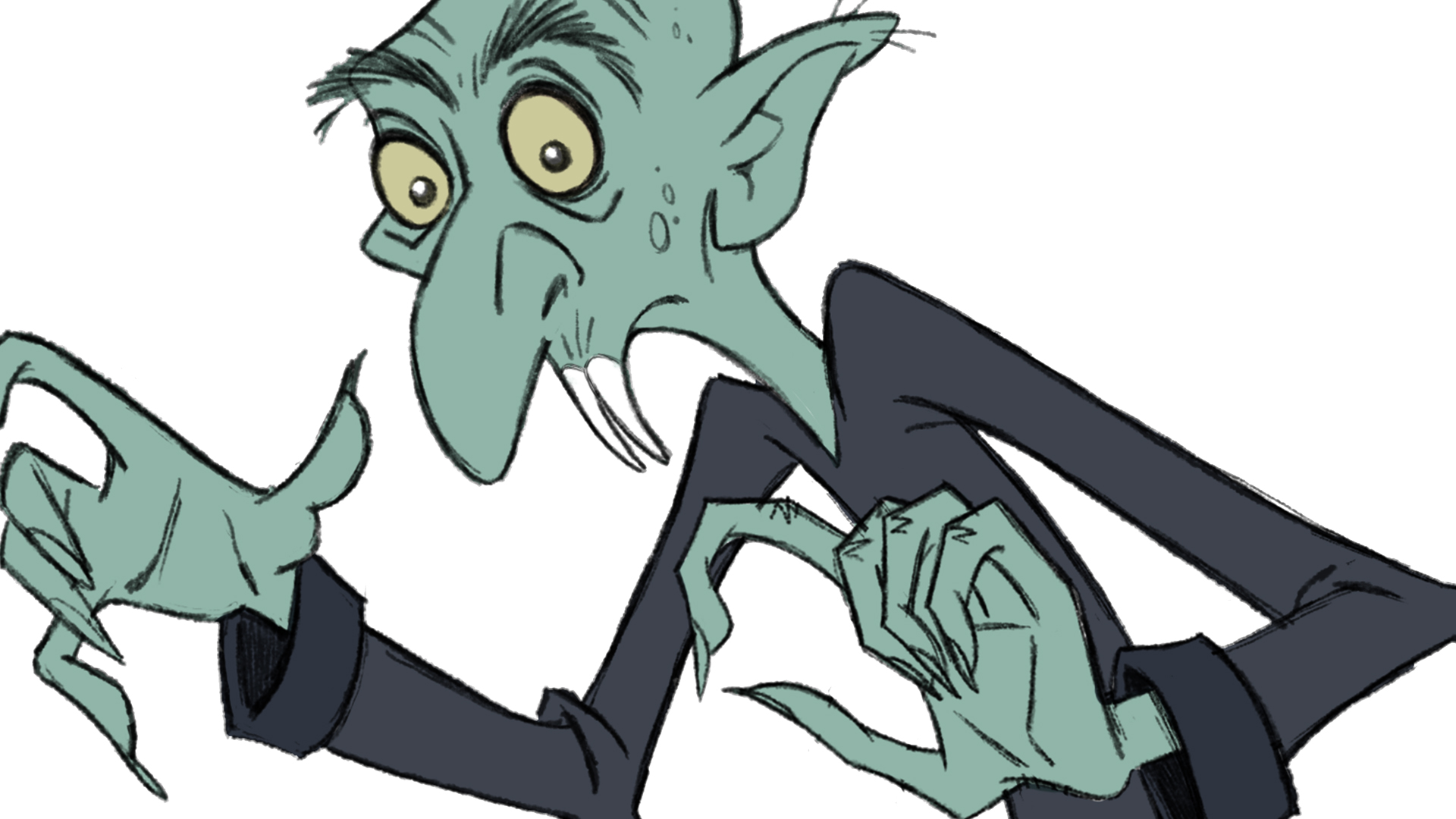 - [Narrator] Now I'm probably going to present to you the scariest tutorial you'll ever see on the website. So, this is the zombie, and obviously this is probably too much detail, luckily the same principles I'm going to show you for the zombie will apply to a skeleton. And we're going to look at a skeleton or a zombie animation, see how it moves and here's the final product. So, as you can see we have some nice, creaky action here. We can really get the sense that there's bones grinding against bones and that's all held in place by a few little bits of gristle.

So, before we go any further, here's a quick reference image of a skeleton that I've created because it's actually difficult to find a really good skeleton reference on Google, a lot of really bad skeleton references out there. So, feel free to use this if you need. So, now I'm going to show you my thumbnails for the zombie walk or the skeleton walk. The major principle that I applied was the leading action, and we've used this in some of our previous characters, and depending on how we apply it we can get very different results. So, if you look at the top row, notice the areas that I've targeted in red.

Now these are the parts of the anatomy that lead that particular section of the animation. Now don't be scared to physically act this out and you'll feel it. Get up right now, stand in place, and just let your body hang still then just move your hip. Move your hip forward. Don't move anything else, just your hip, by about six inches, seven inches, eight inches, however much you think you can get away with and that's a leading action. That's it, and you can see that in the third and fourth images. So, if you move your hip, let the rest of your body hang limp, and follow along as a dead weight.

And then you can, after you've moved your hip, move your knee. Your knee is now leading the action and then you can drag your foot on the ground, it follows. So, you're applying the point of energy to different parts of the body. It can be the chest, the shoulders, even the head. If the zombie is stuck, he'll lead with the jaw as the jaw is snapping and trying to eat somebody. At that point he's leading with his mouth. So, you can lead with one body part and then another, a hip, a shoulder, and then an arm. And depending on the sequence in which you apply it, you get different results.

And so here I've varied it, so you can see the different examples and how they run together. Now, notice in the bottom row, you can't tell that the different parts are leading, because it's all one continuous black and white drawing. But what happens is, you feel it, you just feel this overall jerky effect and that curates this really nice zombie walk. I've added the frame numbers beneath now, and that will really help you with the timing because it's very easy to make these walks too fast or too slow. You really have to get them just right, Goldilocks them.

Now notice the slow in and the slow out of the first 25. Frame 25 can then be held for as long as you like. I can hold that for 40 frames as a static pose, and just have him dangle there or I can go directly into the next walk. So, I've timed this as a very slow walk, so I move from step to the held pose, just for a few frames, maybe seven, eight, nine and you'll see that in the final animation. Here's the second half of the animation. As you can see again, we're holding the standing poses for about nine frames.

And there's nothing stopping you from saying don't hold them at all, just keep them walking slowly, slowly, slowly. Or you can go into a stop pose. Let me go back one, and again, look at the leading action of the shoulder, that's yanking the body forward and then bang it drops. And now I'm going to move with the hip, push that, get him sufficiently off balance that he has to move the knee and then slam it into the ground really fast. You can lead with the elbow, lead with that hip, lead with the knee. On the next panels, again, leading with the hip, etc.

Just repeat this process for as long as you need. If you watch The Walking Dead, if you have the stomach for it, just watch the actors playing the zombies. Many of them will use some variation of this method. So, here I'll take the thumbnails, these are my original pencil sketches, scan them in, and I'll just play them in sequence and apply the timing that we've already seen. And I can tell the instant I put these together that this walk was going to work. You have the feel of a disjointed, very poorly articulated stiff, bony action.

So, then I began to finish the artwork and create the in-betweens, and it's smooth, it gets a little maybe too smooth, but it's well in the zone of looking like a creepy undead walk. So, at that point you really have to look at things that you can do to upgrade the action just to give it a little more juice. And in this case, what I decided to do was to put a little dangle on the arm. Look at his right arm, and you can see every time he comes to one of those stops, it just overshoots and settles. And that gives it just a little feeling that it's not quite as stiff.

It's hanging on by threads and so every time it comes to a stop it just wobbles. Boink, boink, boink like that. And the final part of my process of loosening it up was to drag the head. Look at the skull now and you'll see that I'm off-setting the timing of the skull by one or two frames. And if you offset it by too much, it can end up floating and detached from the rest of the body. So there's a limit to how far you can apply this, but if you can just nudge your skull by one frame or in this case the jaw, which I've also delayed by an extra frame, so the skull reacts to the motion of the body, which makes it feel like it's not quite attached to the spine, which is great.

And the jaw also is one frame behind the skull and so it gives it that loose feeling like it's wobbling, it's trailing, it's reacting to the primary action of the walk. Also, one last thing to watch is the foot. Notice that the beginning of the scene, the foot goes up and down and then the left foot goes up slightly but the right foot then drags. And when I say the left foot moves up, it doesn't move up by much. So, we have this big move here, then slight move there, and then drag along that ground.

1/30/2017
Animating a convincing Dracula or zombie involves many of the classic principles of animation; however, in order to properly spook your audience, you'll often want to make your creatures move in creepy or unnatural ways. In this course, Dermot O'Connor shares 2D animation techniques for making monsters, aliens, and other supernatural subjects come to life. Dermot explains how to deal with muscular creatures, animate jerky creatures, and make eerily smooth movements. He illustrates how to apply each technique by drawing familiar monsters like ghosts, werewolves, vampires, and more.
Topics include: