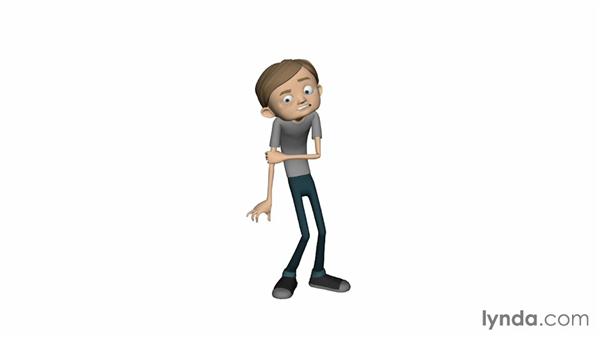 We're going to start off with posing characters. Now the poses your characters take, help to tell a story. An animation really is all about storytelling. So when you pose your characters, you want to have poses that are strong, that tell you a little bit about a character, and that are readable by the audience. So let's take a look at this simple character here. Now he's in a pose, really, any position the character takes is a pose. But this really isn't that strong of a pose.

We could certainly put him in a more relaxed pose. And that's certainly acceptable, but it doesn't really tell us much, about the character. Here we have, another pose. And again, who is this character, and what's going on with him? Now if we want, we can make the pose stronger. So here's a much stronger pose and this helps to tell the story. This is because a character is doing something. So every pose your character takes, the character needs to be doing something.

What is the character doing at any given moment. And that includes just standing completely still. Now if you want, you can have another pose here. And again, this tells a bit more about the character. It gives you a little bit more insight into what's going on with that character. Now if we want, we can actually create a stronger pose here. Here is a pose of the character in pain. This particular pose is very straight up and down. So, it doesn't really have a lot of dynamic quality. And while it tells you a bit about the character, it's not visually interesting.

Now if we want, we can actually push that pose a lot stronger. And when we do that, it creates a much stronger emotion. So this is a milder pose. And this is a push pose, which gives a much stronger emotion. So if you push your characters further, it will heighten the emotion. And remember, animation is real life times ten. It's really an amplified version of life. So try to push your poses. Now when we're posing a character, it's very important to understand where the character's coming from in the body.

So here's a simple pose, and you can see that this pose is coming from a very specific place in that character's body. So here we have this pose here and where really it's coming from that chest or the heart area. And that tells you something about the character. This is the most important part of the character's body at this point. Now another common area to emphasize is the head. So, again, in this pose, the most important part of that character is above the shoulders.

And you also want to understand where the character's coming from. Not just in the body but also from a story standpoint.