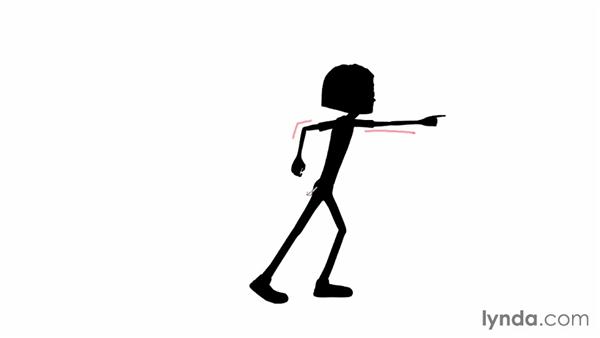 When you post characters, you need to make sure that they have strong silhouettes. This will help the audience to discern what is in the scene. So let's take a look at this. We've got a simple character here and let's just go ahead and show you his silhouette. So when you look at this silhouette you can see exactly what the character's doing. But that might not always be the case. If the pose is poorly staged, you might not see exactly what's going on with this character. So with this pose, if I turn it 90 degrees, you can actually see the pose very, very clearly.

So let's go back to Silhouette mode and let's take a look at another pose. And this one, I have no idea what's going on with that, it looks like he doesn't have any arms. But let's go ahead and rotate this character again and take a look at that. So you can see, he's much stronger in this particular silhouette. And just like with the other pose, we've got things in the clear so you can see, clearly see the finger and the hand outstretched. Now another important thing with silhouetting is that it actually helps you as the animator create stronger poses.

Now if we want to make the character more interesting, we can start to break up these straight line into angles. So if I push the character a little bit forward and then some of the limbs, now I am getting a stronger pose. So in this case I've got a straight line here, but I have an angle here. So this is a good contrast and again I've got a straight line along the back of the leg. But this leg here actually has an angle. Now another important thing is these angles are slightly different, so they're not the same and again that adds variety to the pose and makes it look more natural.

So we've got this open space here. A closed space here. And again, the legs are at a different angle, so again, we're creating more dynamic posing. Now this thing works not just for single characters but for multiple characters. When you're looking at multiple characters in a scene, you also need to consider the negative space. So, in this particular scene, we've got one character whispering in the ear of another. But, if we take a look at the negative space, you'll see that, well, we've got a lot of stuff in there.

So, the space between the characters. We've got this arm kind of hanging out here. And her elbow, and there's not a lot of clarity here. So when you start to look for what's the most important thing in the scene, you're going to see this arm, you're going to see this outstretched arm, and you may not see this, which is really where the scene should be focused. So if we push this pose and change it up a little bit you can see that as I change this pose, I'm giving it more negative space. So what I'm doing here is I'm pushing her back, bringing this arm in so you don't have to see it.

Tucking his arm in again. And what I'm doing is, I'm creating a big negative space here. And where they interact right here is where the eye will go. So each one of these will direct the eye to that intersection between them, which is her whispering in his ear. And that again directs the audience towards the most important part of that scene. So when you silhouette, make sure that your character's parts are in the clear, and you can clearly see what the character is doing.