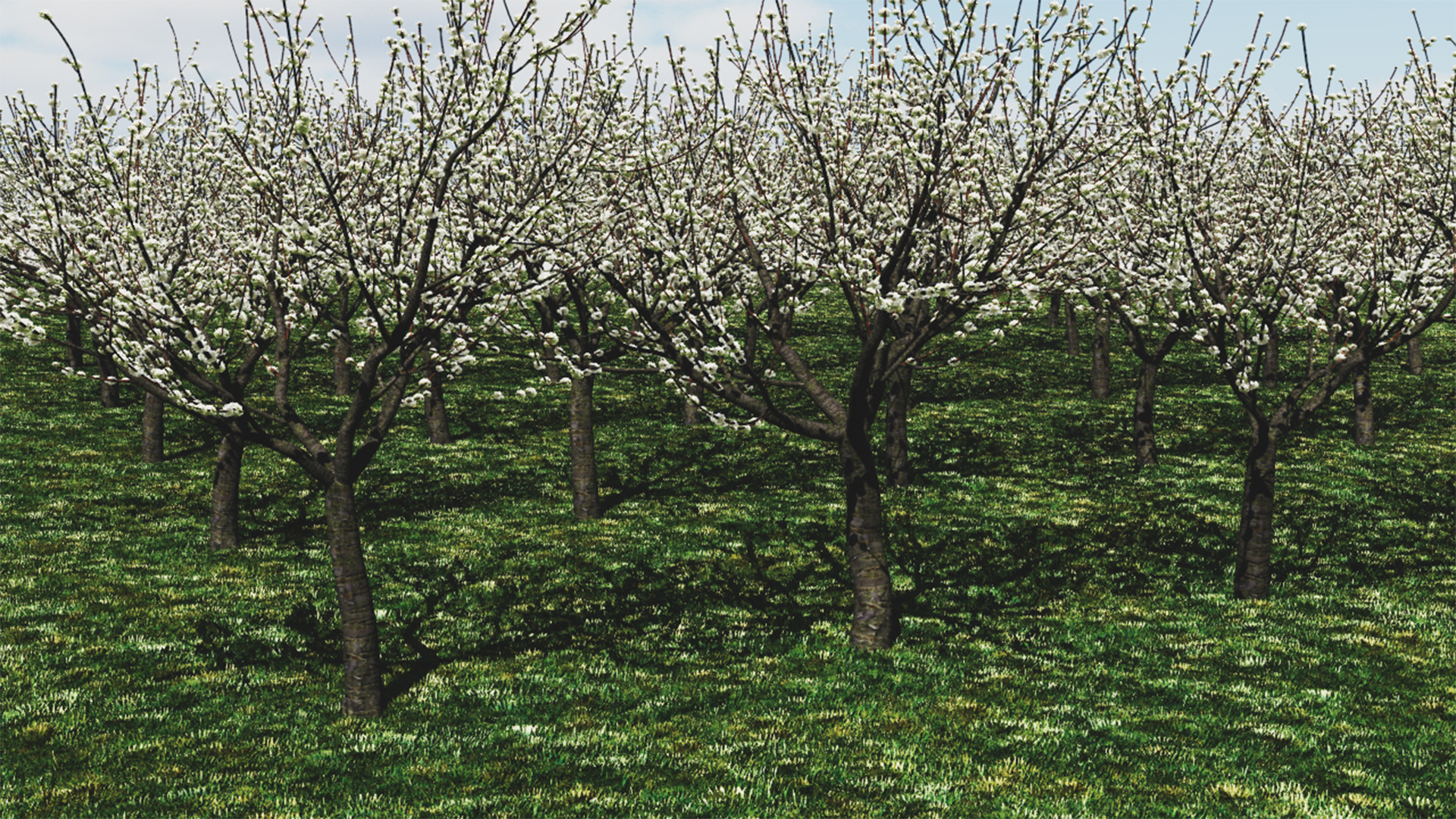 - In this chapter, we'll look at materials in PlantFactory. I've got another version of the cherry tree that I've further fine-tuned to make it a bit more botanically accurate. Let's zoom out to see the entire plant. And it's got a whole bunch of billboards on here. We need to hide those billboards in order to see the material and the structure of the branches. There's a button on the main toolbar here that allows us to hide all the billboards. However, if we did that, the billboards would still render if we did a test rendering. To make sure that I can just look at only the branches and not the leaves in a rendering, I'm going to size the billboards to a value of zero.

I'll turn that display option back on and go over to the Billboard Node here at the end of the graph. Notice that the billboard has eight inputs. I set it up so that each of the four segments in the graph has two outputs to the billboard, one for the axis, and one for the tip. And I've done that so that there will be billboards at the very ends of each segment. Select that Billboard Node, and go to its Transforms, and just give it a Global Scale of zero.

And now they're effectively invisible. They won't render and they won't show up in the view either. Notice that with a Global Scale of zero, it actually says here we have zero leaves. What have I done here in order to give this a little bit more naturalistic, botanical look to it? Mainly I've increased the tropism, and that's the ability of the segments to go up or down, to go towards the light. And if we navigate in the graph and go to this Secondary branch node, in its segment tab notice that I've increased the tropism to a value of one.

If tropism were zero, then those secondary branches would point straight out. If it had a negative value, like negative one, then they would go down. I've given them a positive value, so that they point a little bit upward. Before we look at materials, we also should look at the Node Color. Each of the nodes in the graph can have a unique color, and we can display those in the Preview Window as well. There's a button labeled Show Node Color on Plant. Click on that, and you can see that I've applied different colors to each one of the nodes.

The Secondary branch, for example, is displaying in magenta. To change the node color, just select the node. I'll go over to the trunk and select it, and in the upper left of the Parameters is a color swatch, click on that, and you can change the color to whatever you want. Let's say I want the trunk to have saturated blue. I'll give it a Red of zero, Green of zero, and a Blue of 255. Click OK, and now each node in the graph has a unique color and I can easily identify the part of the plant just by looking at its color.

If we want to go back to displaying the materials, just turn Show Node Color back off again.

12/17/2015
PlantFactory is a revolutionary 3D vegetation modeling, animation, and rendering software package. Plants and trees created in PlantFactory can be exported to almost any 3D application (including 3ds Max, Maya, Mudbox, and CINEMA 4D) and are fully rigged and textured. Wind-animated plants can be exported as fully rigged meshes. That way, you can fine-tune the plant animation directly inside your preferred application.

In these tutorials, Aaron F. Ross shows how to get started with PlantFactory. He'll cover modeling plants and trees, sculpting plants from components, editing plant parameters, adding materials and animation effects, and rendering the results. Plus, learn how to use PlantFactory's powerful node graph to control individual properties and generate plants procedurally.
Topics include: