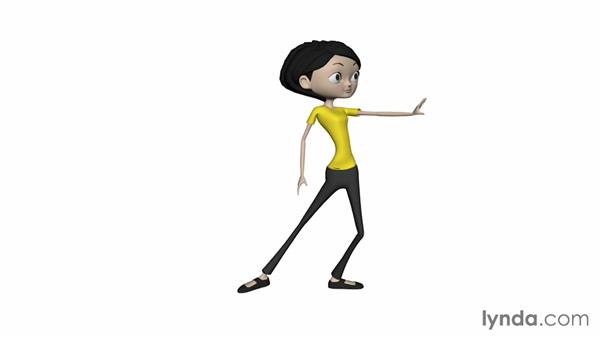 Line of action is very important to character posing, it helps to keep the character dynamic and it also helps to guide the audience's eyes to specific parts of the scene. So let's take a look at a dynamic pose here. We've got this character in this pose. And if you want to take a look at the line of action, you'll see that it has a very strong, straight line that goes all the way from her shoulder down to the ground. And what this does is it basically gives a line along which the eye can come, to focus on the character's face.

because what happens is, this foot here, it's kind of a right angle. And it kind of interrupts the flow of this character. So if we want to make an even stronger line of action, we can turn that foot out. And what that does is it continues the line, so here we have a line going all the way from the shoulder down along the leg and out past the toe. So that gives a much stronger line of action, and a much more pleasing pose. Now if we want, we can also take a look at the hand of the character.

Here we have this hand, but notice how the thumb is kind of coming up at this angle. And that really doesn't align with the line of action of the arm. So for every part of the character, you need to consider line of action. So if we drop that thumb just a little bit, it really strengthens the line of that arm. So now I have a continuous line along the arm that goes straight up past the thumb. So as you start creating line of action in your characters, make sure you pay attention to all parts of the character.

Now, if we want we can take a look at another type of pose here. Here we have basically the same pose, except in a different angle. So instead of her going forward, now she's going back and that creates a much different line of action. So now the line of action is going back and so now she's actually backing away from, the thing she has her hand out to stop. Now here's another pose. Okay, and again we can create much stronger line of action with this pose.

This pose is pretty vertical, but if we want we can arch the back. And that begins to give us a good line of action here. So we've got a much stronger line here. It's much more interesting. And, if we push out the foot, like we did before, and work with the hands. Again, we're getting much stronger, line of action, on this character. Now, line of action, is not just for stationary poses. It's very useful for character that is in motion.

So here we have a character and he is holding a rope. Now we have some line of action for this character. Got a basic line here, it's kind a vertical and that's fine for this particular character. There you can see that he is really just holding the rope. He is not really working with it. If we want, we can amplify that pose. So if I push him back a little bit, you are going to get a much stronger line of action and this will also show the tension.

Between the rope and the character. So in this case, we've got a strong line that's going all the way out through his toes. But another important thing is that his arms are almost straight which basically indicates that there's tension. So the weight of the rope is pulling against his arms or he's pulling against the rope. So that gives a much more dynamic sort of pose. Now if we go in the opposite direction, if he's pulled forward, then we have a different line of action.

And again, we've got a very straight line for the arms, so you can see that there's a lot of tension there, there's force being transmitted to that character. And then the back is arched in this way, which basically is meaning that he's being pulled in that direction. Now if we go to the other pose here, you can see that this is almost exactly the opposite in terms of his spine. So you can see with this line of action here again it is opposite of the previous one. So his back is basically going this way.

And it's a nice curve that's going that way. And then if we scrub forward, you'll see that this line of action is the opposite. So really what we're doing is we're going from one curve to the opposite. And it really changes the tension of the scene. So as you can see, this line of action that we have, really helps with the scene. So you can see the line of the character moving as he animates. So line of action is very important, not just for still poses but for moving poses.

So make sure that as you pose your character, you get strong line of action.