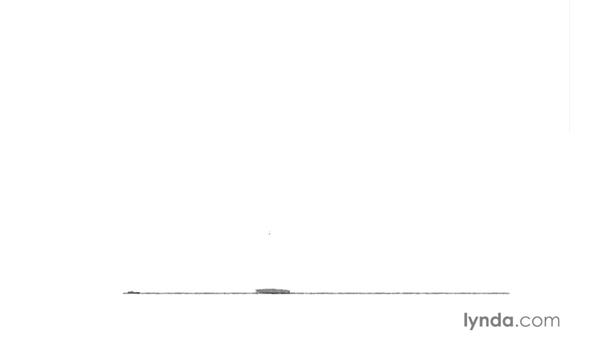 - Our next rule of thumb is the idea of counterpose or torque. So here's a character with none at all. He's just standing there front on. There's nothing really interesting happening here. This is your classic model sheet pose where, if you're building your character, this is usually the kind of pose you want. But if you're doing something that's dynamic in action, you don't want this. So let's see first of all what's going on under the skin. So here we can see the hips and the waist as I imagine them as two little cardboard tubes and they're connected by the vertical spine.

So in this example, as I already said, there's nothing interesting going on. They are parallel to one another. If you could rotate these around in space, you would see they're perfectly aligned on every axis. And here they are side by side. So if we do a pose that's a little more dynamic than that, then what we have is the torque or the counterpose. We're beginning to twist these tubes out of alignment, and here's what they're doing under the skin. And what you'll notice is that each tube is moving, in this case, in a very different direction and, it's also note, creating a little S curve on the spinal column.

You have this tube facing out in this direction. This tube is facing out in that direction. And this is the body's way of maintaining balance or equilibrium. Things tend to counterpose each other so that if one part of the body is out of alignment or shifting its weight, the other part will twist to compensate for that, and this is how we can walk without falling over. The other principle that this creates a sensation of movement, even in a static image. If you look at Michelangelo's sculptures, for example, you'll see in these figures that they've twisted the hips and the shoulders and you get this spiral effect.

It seems like there's motion that's twisting up and around and coiling around the body. Now this principle is really important in walks and runs, and if you don't apply it to your walks and runs, there's a very good chance that they'll look very limited and stiff. And here you can see I've colored the left side of the body red and the right side blue so that it's more easy to read the action. And essentially they counterpose on every axis so as this part is down, this part is up. If this part is up, this part is down. As this hip is forward, this shoulder is forward.

And as this hip is forward, the same shoulder is backwards. So they're opposing and countering each other through the major poses or the contact poses of the walk cycle. Let's see how that looks when we overlay them. So even with these two poses, you can see how we can create a very dynamic and believable walk cycle. And here we have a standing pose very similar to the very first standing pose I showed you but the difference is with this one, we've applied some very subtle counterpose or torque to the armature, to the skeleton and that's enough to break us out of that dead model sheet pose.

So now let's see how we apply this idea of torque or counterpose to a big action scene. In this case I want a character who's, say, throwing a ball. So first things first, I want to know where he's standing so let's get a ground plane. And we'll put his foot somewhere around here so he's planted that on the ground. And I want him to throw the ball and have his arm somewhere around this point of the screen and the ball will be leaving his hand around there. So that gives us something like a line of action like that and now we can begin to build the rest of the figure around that.

Now remember this is his hand so his shoulders are going to be around here, hips are going to be around there, and head will be somewhere around here. So let's draw in the shoulders and the right arm will be throwing the ball. So I'm just going to block in. Nothing more than that, just a glorified mitten. And the hips I'm actually going to have them more or less rotating the same way though the hips will be tilting towards us and the shoulder actually just a little bit more.

So they're still twist. They're both facing out in the same direction and they don't have to always be in opposition to one another. In this case, we have a rotation on the hips and an even bigger one in the same axis on the shoulders and that's because we're getting this one huge big throwing motion towards us. This leg here, let's have that trailing back because that's kicked off the ground further away in space over here. So let's draw in that foot. And his left arm isn't doing anything except counterbalancing, so let's just give it like a little position there.

And I'll draw an eye line just to have an idea of the tilt of the head but don't go drawing in eyes. That's a complete waste of your time. The whole point of this level of drawing, this phase of the process, is to just get the essence of the action in, do a little bit of cleanup. So now that we have that done, let's use our flip horizontal trick and I'm just going to look at it horizontally. And this gives me an instant of freshness to see if this is really what I want. And what's throwing me about this is this curvature. He feels a little too far forward, not a lot, just a little.

So what I want to do is put a slight bend in his knee. That looks much better already. So this flip horizontal trick is really a great tool and I use it an awful lot. And it really helps you from those points in the drawing when you just go blind to your own mistakes. So if you have a digital program, you can set your shortcuts up to do that. Photoshop, GIMP, Kreta, all these different programs have their flip horizontal tools built in. If you're drawing on paper, do what I did when I was doing this course. I drew it on paper. I would hold my drawing up in the coffee shop up to the sunlight, and have people think I was a crazy person, but then I would see the mistakes coming through the reverse side of the paper, and if you have a mirror, same thing.

So that's how I would do that. Now let's a little red line over this so I can show you what's really happening with the torque on these hips. So there's our tube. If I was looking down that would be tilting towards us about this much. And this tube here is coming forward a little more. We're seeing a twist on the spine. And if I was looking straight down on that, it's just even just a little bit further towards us. So that's our twist, and that's our down shot on the body.

So again there's no reason why these have to be in opposition to each other. One is moving towards us and the other is moving even more towards us but that's what's giving this great feeling of energy in this throwing pose. So remember counterpose torque will be a huge assistance in keeping your drawings alive.

Follow along with your favorite illustration program, your Wacom tablet, or paper and pen.
Topics include: