Balance and symmetry in poses 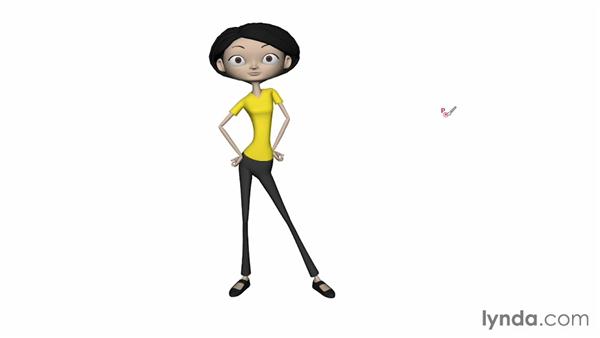 Now this particular pose is not that interesting because it's symmetrical. So if we want to make a more interesting pose, we can certainly push the character to one side or the other. And this actually changes the balance of the character. Now if we want to, we can also get the hips and the shoulders involved to get a much stronger pose. Now with this sort of pose, you can see how the weight has shifts. Now instead of going straight down, it actually is going more down through this leg.

But we can certainly fix this pose, too. All we have to do is shift the weight of the character. And once we do, we have a much more balanced pose again, because now we've got this mass of her torso and this mass of the hips over the feet. So you can see that the weight of this is really coming down between the feet. So we've got again a balanced pose. And really what we want to do is we want to collect all the masses of the character and then just draw a straight line down to the ground to make sure that the character is properly supported.

So let's take a look at how to create a balanced pose. We're going to go ahead and just start with a reasonably symetrical pose and again, this one has the weight between the feet. And again, if you take a look at this pose, we have the weight going straight down, and it's pretty much centered between the feet. Now if we push this pose over, you'll see that again, we're getting the weight above one foot, so now the weight is actually going on the character's right foot.

So basically this hip isn't supported, so what's going to happen is gravity is going to pull that hip down. So if we rotate that hip, then we get a much better lower body position, because now this hip is rotated because it is supported more firmly on this side than it is on this. And so we're getting this kind of angled motion here. So we're basically getting kind of a tilt in the hips of the character. But when we do this, you'll see that well, the upper body of the character doesn't look quite right.

Of course we can fix that, just by tilting the character up, and when we do that, you'll see that we get a really classic situation that you'll see in a lot of balanced poses, and that's the opposition of the shoulders and the hips. So basically what we have, is we have the hips are at an angle. And that's because you're supported more on one side than the other. But in order to counter balance that, we have to angle the shoulders in the opposite direction.

So we have the hips going this way and the shoulders going the opposite way. And the spine itself is just curving to make that happen. And this is really very classic in a standard, balanced pose. You're going to have the hips going in one direction, the shoulders will go in the other, to balance out that pose. Now, when you're working in 3D, you have to take into consideration the entire character from all angles. So, if we take a look at this pose, from the side, you'll see that, while it's balanced, it still isn't quite fluid.

It's very straight up and down. So if we want we can pose it from another angle just to add a little bit more realism to the pose. So what I'm going to do is I'm going to arch her back a little bit, push her rear end out, and she'll have a much stronger pose. And then when we take a look at this from the front, you'll see that the character looks a little bit better. So again, we can do this on the opposite side. So if her weight shifts to the other side, again, we'll have the same situation. We'll have the hips going in one direction, shoulders going in the other, and then the spine, connecting them.

So we have, for example, the hands. And those are actually subjected to gravity. So gravity is trying to pull those hands down. The same goes with the feet. That foot wants to be pulled down, it weighs something. The character is expending energy to hold all of this up. And the same goes for the character's body. He's got, you know, his body is really supported just by one leg. So everything wants to be coming down. So you see, the character's really just moving in that one direction.

He's trying to move down. So as you pose characters, you want to take this into consideration. If you're holding a pose like this for a long time, you need to make sure that you take into account the effect of gravity. Now with this pose here, this pose is pretty much balanced. But as a character moves into action, he will move into an unbalanced state. And this is a very important point. Poses that are static, are balanced. Action poses are unbalanced.

And that tells the audience that he's in motion. So as you can see, balance is really important for character poses. Make sure that in static or stable poses, that the weight of the character is over one foot or the other, or both. And then when the character moves into a more dynamic pose, you can push the character out of bounds.

Video: Balance and symmetry in poses