Walking to the shed 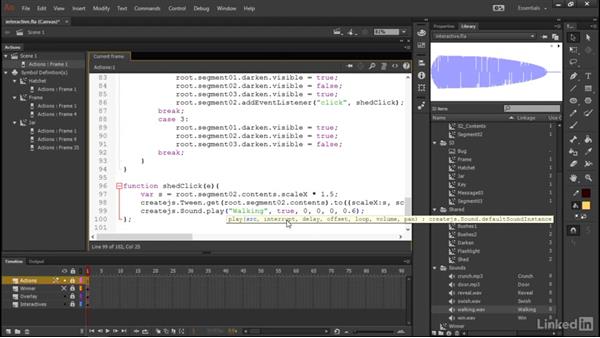 The second segment panel is pretty straightforward - the user simply clicks a number of times to “walk” toward the shed that was discovered in the 1st segment. However… they won’t know that at first! We’ll simply scale the content symbol to simulate this.

- [Instructor] The second segment panel…is pretty straightforward.…The user simply clicks the number of times…to walk toward the shed…that was discovered in the first segment.…However, they won't know that at first.…We'll simply scale the content symbol to simulate this.…The first thing we'll do is go down to our switchState,…because we need to add a new event listener for state two.…So here's switchState.…If you remember, we did the same thing in state one.…I'll paste in this little snippet here.…

And this is going to go ahead to root.segment02.…And addEventlistener of type click.…When click occurs, we'll invoke a function called shedClick.…Let's just go down here and right after this,…we can put the shedClick function in.…And you can really put it anywhere you want.…I'm pasting this in from our snippets file.…Here's our function shedClick,…and we initially set a variable s.…The variable s is gonna take segment02.contents.scaleX…and then multiply that by 1.5.…

Video: Walking to the shed