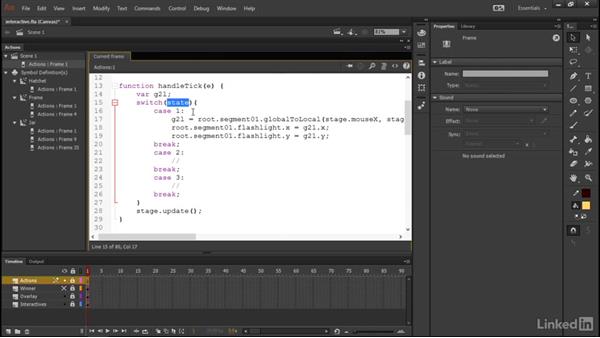 In this interactive, we need to be constantly monitoring the user interaction and determine if certain conditions have been met based upon our current state. To make this simple and unified - we’ll employ the CreateJS Ticker.

- [Instructor] In this interactive,…we need to be constantly monitoring the user interaction…and determine if certain conditions have been met,…based upon our current state.…To make this simple and unified…we'll employ the createjs ticker.…Let's go right up here after our variable declarations…and put in some space for us to paste a little snippet…which activates the ticker.…This is directly from our snippets file…and initially what we do is we invoke createjs.Ticker…and we addEventListener of type, tick.…

For our event handler, we name a function called handleTick…and then we create that function right beneath it.…So here we have function handleTick…and an event of type tick comes through here,…we'll use this event from time to time…in order to monitor different things.…Initially we're going to set a variable…called global to local, or g2l,…and then we'll switch once again based on state.…So if you remember,…down below we have a switch(state) command…where we also have a switch statement.…

This functions in very much the same way…