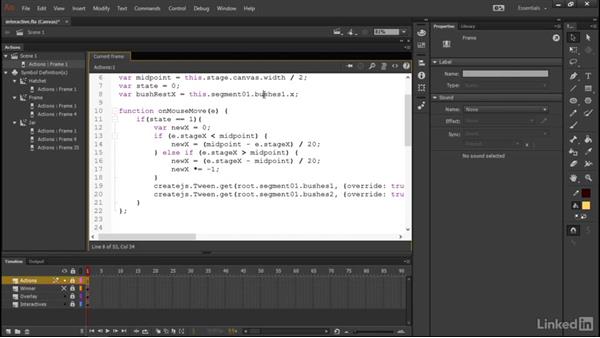 This will look somewhat familiar. We are going to replicate the bush movement from earlier in this course in order to make this project seem similar to a continuation of the previous one - once both are embedded within the same page - it will be a continuous experience for the user.

- [Narrator] This next part will look somewhat familiar.…We're going to replicate the bush movement…from earlier in this course in order to make…this project seem like more of a continuation…of the previous one.…Once both are embedded within the same page,…it will be a continuous experience for the user.…So, inside of switch state,…I'm gonna add something else in here.…For state one, and that is an event listener.…So I'm adding an event listener of type…stagemousemove, and I'm binding that…to the stage itself.…

When our project detects a stagemousemove event,…it will invoke a function called onMouseMove.…So I have another snippet that I can use…for onMouseMove, and for that, I'll bring it way up here…around line nine, and paste it in.…There's two things that I have going on here,…the first one is bushRestX, so,…this is exactly the same thing we did for…our interactive banner project for the mystery garden.…

Here it sets it, in this case,…to this.segment1.bushes1.x,…so it preserves that initial position of our bushes.…