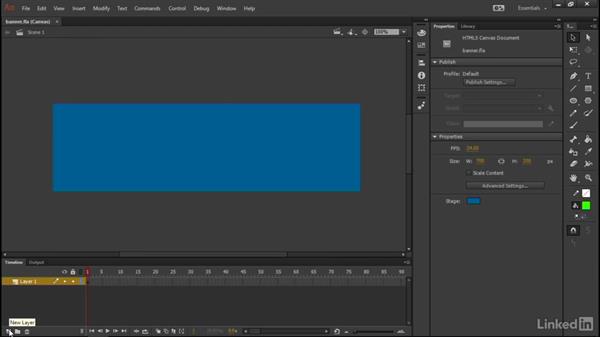 The first thing we must do to build our interactive web banner animation is to configure the stage and timeline. We’ll create a new HTML5 Canvas project and set everything up for subsequent lessons.

- [Narrator] The first thing we must do to build our…interactive web banner animation is to configure the…stage and timeline.…We've got a new HTML5 Canvas project here.…We just need to set everything up…for the subsequent lessons.…So, let's go ahead and change the stage color…for one thing.…I'm going to pop in some numbers here, 006699.…We get this nice blue color.…I'm going to also modify the width to 700 pixels,…and the height to 200 pixels.…

Then we'll center the stage, using the center stage button.…We're going to have eight layers in our timeline.…We've got one right now.…Let's create the other seven by choosing…the new layer button here, seven times.…There we go.…We have our eight different layers.…And now we'll name them all.…So, the first one is going to be actions,…and that's where all our code will reside,…so we'll lock that down.…The second one will be reserved for our title.…We'll need one for foreground elements.…

Happy bug for our little insect to reside upon.…A layer for our hill element,…and we have two layers for our bushes that are going…