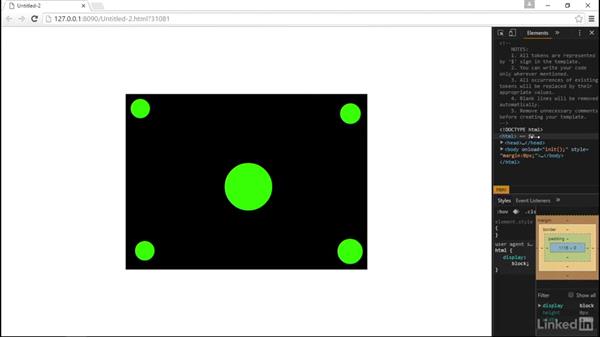 Responsive design is a big deal when producing web content for modern browsers - whether desktop or mobile in nature. It is completely possible for Animate to generate fully responsive, animated projects with some modifications to the HTML5 Canvas publish settings.

- [Instructor] Responsive design is a big deal…when producing web content for modern browsers,…whether desktop or mobile in nature.…It is completely possible for Animate to generate…fully responsive animated projects with some modifications…to the HTML5 Canvas published settings.…So here we have a basic Canvas document,…and I'm just gonna go ahead and draw…a couple of small circles in each corner,…and then one in the center here.…If we go ahead and choose Control, Test Movie,…we can see that everything looks exactly like it did…within Animate itself.…

Let's go to our actual Publish settings for this document…and you'll notice a few things here.…Under the Basic tab for JavaScript/HTML,…we can Center the stage.…We can choose to center Horizontally, Vertically, or Both.…Let's choose Both and hit Publish.…When we refresh, we can see that while it's not…quite responsive, it does center to the horizontal…and vertical dimensions of the browser.…

Let's choose Make responsive.…Here we can say we want it responsive by Width,…