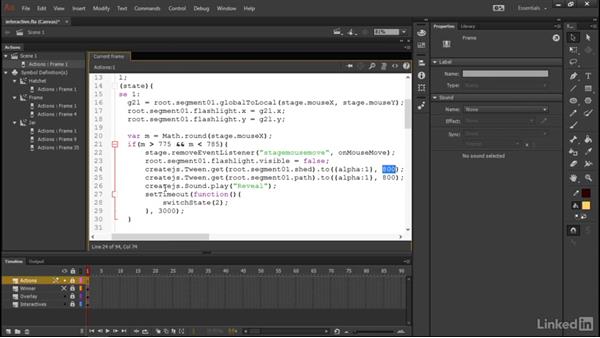 The way in which the “Mystery Garden” stateful interactive operates is that the user is given a text hint for each segment which points to some kind of interaction that has to occur before unlocking subsequent segments. Let’s build this state trigger interaction into the project for the 1st segment.

- [Teacher] The way in which the…Mystery Garden Stateful Interactive…operates is that the user is given…a text hint for each segment,…which points to some kind of interatcion…that has to occur before unlocking subsequent segments.…Let's build this state trigger interaction…into this project for the first segment.…The first thing I'll do is go down…to our initialization function.…And here, I want to be able to hide…a few other things within our Segment01.…I'll paste in this small two-line snippet here,…which goes into Segment01 and changes an instance…of a movie clip called Path and one called Shed.…

Setting its alpha to zero,…because initially we don't wanna see these.…We want to have the user explore and discover them,…and then we want to show them to the user.…To make that happen, let's go out…into our ticker once again, which is up here,…and right below the control for the flashlight,…we'll put some space in and paste in an additional snippet.…This is going to determine whether or not…the user should move on to Segment02.…