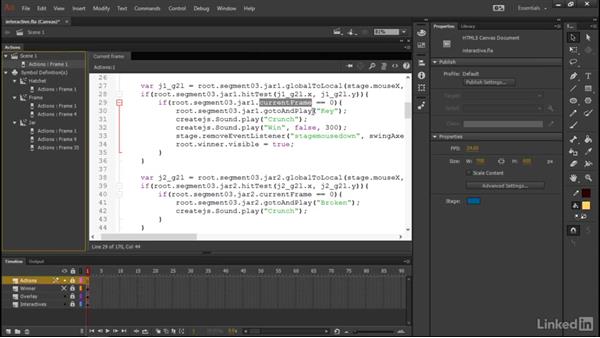 Now that the user can acquire the tool needed to interact with other objects, we need to write a little code to detect and handle these interactions. We’ll also, most importantly, write the logic that allows the user to complete the interaction.

- Now that the user can acquire the tool…needed to interact with other objects,…we need to write a little code…to detect and handle these interactions.…We'll also, most importantly,…write the logic that allows the user…to complete the interaction.…Let's go down to where we're swinging the axe,…and, within the swing axe function,…I'm gonna paste in a big code snippet.…So, there are a number of pieces to this snippet.…Here's the first one.…

For each of these, we're going to check…global to local so that we can translate…the global coordinates of our axe…and our mouse cursor…to segment three's coordinate system.…Here, we're gonna check and see jar1.…We want to test and see if…the axe is going to hit jar1.…So what we do is, we say…jar1 global to local…and then we pass in the stage.mouseX and mouseY…to see if these actually overlap.…

To test and see if they do overlap,…we use a hit test.…Hit test is a function inside of CreateJS that we can use.…So we say, if segment03…jar1 hitTest,…and then we test against these interpreted coordinates,…