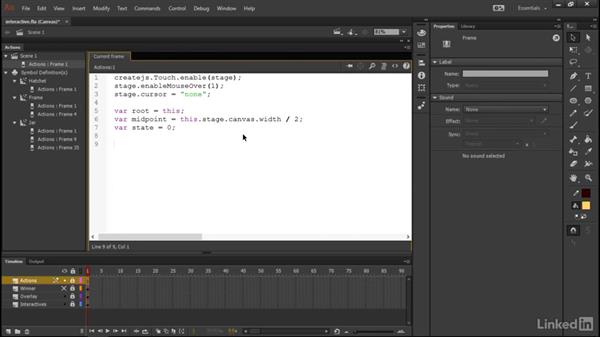 The first thing to do with our interactive is to initialize the code and set up the properties to our various segment states. We’ll also need to keep track of our current state, and provide a mechanism to switch between them.

- [Instructor] The first thing to do with our interactive…is to initialize the code and set up the properties…of our various segment states.…We'll also need to keep track of our current state…and provide a mechanism to switch between them.…So making sure that you have the Actions layer…on frame one selected, let's choose Window, Actions.…This brings up the Actions panel,…and you can see that we actually have a number…of different actions already on things like…the hatchet, the frame, and the jar.…

Basically, all these actions simply stop the timelines…for those animations, and we'll see how these work later on.…For now, we want to paste in a snippet…from our Snippets file into the current frame,…which is frame one.…The Snippets file, of course, can be found…with the exercise files.…So here what we're doing is setting our touch on createjs,…so we're using createjs.touch.enable,…and then we're passing in the current stage.…This enables touch.…We're also gonna go ahead and enable mouseover…for our stage.…

When you enable mouseover in createjs,…