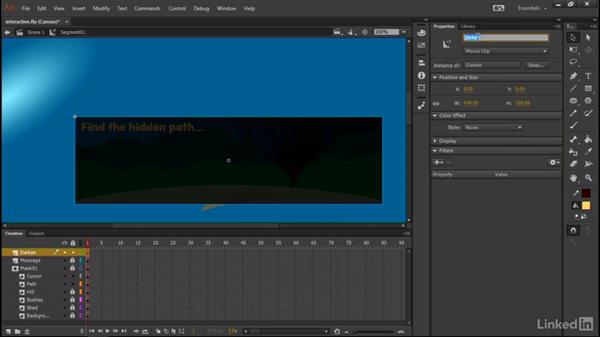 Before moving on to the programming portion of this interactive, we’ll need to explore what we’ve just laid out upon the project stage, as much of this content was created and assembled beforehand. Let’s examine these pieces segment by segment.

- [Narrator] Before moving on to the programming portion…of this interactive we'll need to explore…what we've just laid out upon the project stage.…As much of this content was created…and assembled beforehand.…Let's examine these pieces segment by segment.…The first thing we'll do is enter the Library…and find Segment01, right here.…If we double-click on this we can see exactly…what's going on in this particular segment.…Let's expand this a little bit…because there's a lot going on in the Timeline here.…

The first thing to note is that the bushes,…the background and the shed are all Shared Assets.…These will actually appear…in just about every segment we use.…So we're just using them over and over again.…You can see that these are being Masked here.…If we have this Masked they won't spill out…over into other segments and across other segments.…It keeps it nice and tidy.…And makes it so the user can't see…anything going on outside of this window.…

The Mask itself is simply this object right here.…And to create a Mask there, all you need to do…