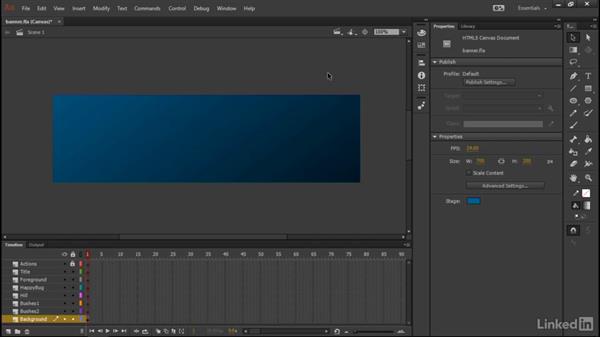 With our project configured, let’s begin creating some visual assets that can be used as a background. A significant background visual, even when static and not animated, is important when establishing a project such as this.

- [Narrator] With our project configured,…let's being creating some visual assets…that can be used as a background.…A significant background visual,…even when static, and not animated,…is important when establishing a project such as this.…The first thing we'll do is choose the rectangle tool.…And, I'll turn object drawing mode on,…making sure my background layer is selected.…And then we'll click and drag…across the entire stage, choosing the selection tool,…and selecting that drawing object…we can see that it isn't perfect,…so, let's go ahead and set the x and y to zero,…change the width to 700 pixels,…and the height to 200 pixels,…so it matches the stage dimensions.…

Going ahead, let's open up the color palette…and what we want to do, is define linear gradient.…This linear gradient is going to be black, and black,…so let's go ahead and do that now.…However, this particular black key right here,…is gonna be about 88%, and this last one,…we're gonna pull down to zero.…Let's add that to swatches in case we want to use it again.…