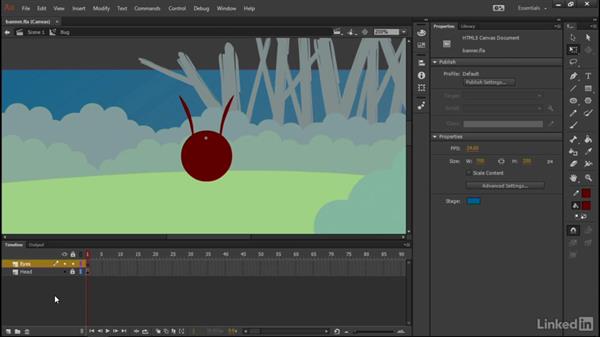 The “Mystery Garden” needs inhabitants… so let’s design a happy little insect to populate the garden banner. To do this, we’ll use some of the shape tools in Animate, and build out a structured “Bug” MovieClip symbol to allow some nested interaction down the line.

- [Instructor] The mystery garden needs inhabitants so let's…design a happy little insect to populate the garden banner.…To do this we'll use some of the shape tools in animate…and build out a structured bug movie clip symbol to allow…some nested interaction down the line.…The first thing I'll do is go over and choose my oval tool…and change the fill color to something…I've already determined.…The hex code for this is 660000, it's this nice…dark red color kind of rusty looking.…

With the happy bug layer selected I'm going to click…and drag out a circle for the bug's head.…And selecting that I want to actually make sure…that this is a drawing object.…So I'll choose create object out of that and I will lock the…width and height because I wanted to be a complete circle.…However, I want this to be about 58 pixels.…That looks like a good size so that's perfect.…Let's actually zoom in here,…So that we can focus on the different pieces.…

The next thing I'm going to create are the antenna.…For that let's choose the line tool.…