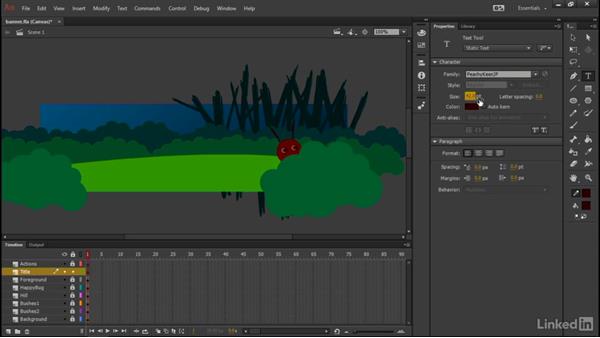 The “Mystery Garden” web banner needs to be branded appropriately. When people visit the website, they should recognize immediately what the site is for. We’ll use Typekit fonts to build a “Title” MovieClip symbol that will hold the text “Mystery Garden”.

- [Narrator] The Mystery Garden web banner…needs to be branded appropriately.…When people visit the website they should…recognize immediately what the site is for.…We'll use Typekit fonts to build a Title Movie Clip Symbol…that will hold the text Mystery Garden.…So with the Title Layer selected…let's go ahead and use the Text Tool.…And we don't wanna use Times New Roman…and we don't even wanna use Dynamic Text for this.…Let's use Static Text.…And what we'll do is choose a font called Peachy Keen JF.…

And here it is right here.…I've already synced this down…through my Creative Cloud subscription through Typekit.…So this is a desktop font and once that's chosen…I can go ahead and make some changes.…For instance, I want this to be about 42 points in size.…And, as far as the color goes,…this dark red isn't gonna cut it.…I'm gonna punch in a different hex value FFCC66.…

So this nice orange color.…With that done, I'll click and type in Mystery Garden.…And there we are.…Let's go ahead and align this…to the upper left of the stage.…