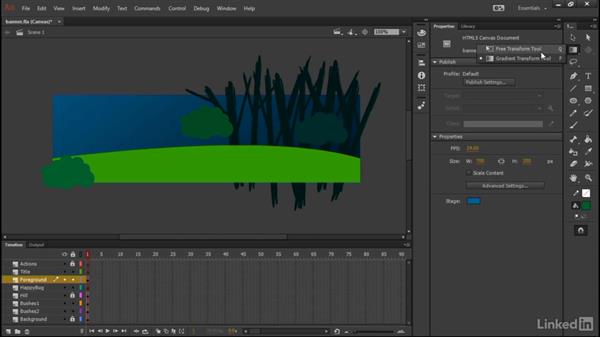 Since we’ll be creating an interactive banner for the ‘Mystery Garden’ website, we’ll need more than just a few trees in the background. We’ll now go ahead and design a variety of bushes to be used within the interactive.

- [Instructor] Since we'll be creating…an interactive banner for the Mystery Garden website,…we'll need more than just a few trees in the background.…We'll now go ahead and design a hill…and a variety of bushes to be used within the interactive.…The first thing I'll do is use the rectangle tool…to draw a hill.…I want my stroke style to be solid,…and actually, I can turn that off altogether.…For a fill, I'm gonna punch in a number here,…and that's 339900, and that makes this nice green color.…

Choosing the hill there, I'm gonna go ahead…and draw out a basic rectangle,…which I can then go ahead and use the alignment panel…with that hill selected to actually align it to the left…and bottom of our stage.…Additionally, I'm gonna make sure that the width is 700,…and the height at this point is okay.…That's 55, that will probably work.…Using the selection tool, I'm going to click off…of the hill object, so just in the paste board here,…to deselect everything, and then…I'm able to hover over the edge…and then sort of pull the hill up just like that.…