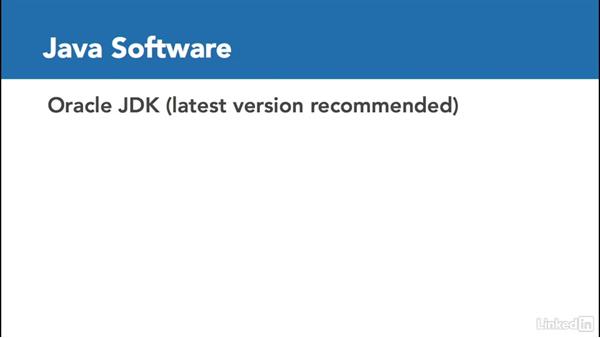 This course is designed for software developers who want to create apps for Android devices. When you build Android apps, you'll be programming with Java and XML. And the more you know about these languages, the more effective you can be as an Android developer. Starting with Android 7, Nougat, when you program in Java for Android, you’re working with Oracle’s OpenJDK. With a few exceptions, Java 6 and 7 syntax works. Advanced Java syntax is used extensively, such as inner and anonymous classes. And with some changes to an Android project’s configuration, you can even use some features that were introduced in Java 8, including lambda expressions and method references.

- [Instructor] This course is designed for software developers who want to create apps for Android devices. Android is more than just the operating system. It also includes the application framework and a set of compiler and packaging tools that you'll use to build your applications. When you build applications in Android, you'll be programming with Java and with XML. And the more you know about both of these languages, the more effective you can be as an Android developer. Android developers primarily use Java code that's based on Java six and seven syntax.

You can also use certain Java eight syntax, such as Lambda expressions and method references if you configure your project to use a new tool chain called the Jack and Jill compilers. There are certain advanced Java syntax styles that are used frequently, such as the implementation of interfaces as anonymous classes. To get started with Java, watch the course Java Essential Training. And to learn about the advanced syntax, watch the course Java Advanced Training. If you're new to working with XML, I recommend learning a bit about it.

XML is used extensively in Android apps. You'll use XML files to define activity or screen layouts, menus, colors, strings, and much more. The basics of XML vocabulary are covered in the course XML Essential Training. And to learn a bit about how to work with XML specifically with Java, you can watch the course XML Integration with Java. Android developers use Android Studio to build their apps. Android Studio is based on IntelliJ IDEA, a popular IDE for Java developers.

I'll describe a lot about Android Studio during this course series, but if you want to learn a lot more about the product watch the course Android Studio Essential Training. There's an older set of tools for Android developers that was based on the Eclipse IDE, known as the Android Developer Tools, or ADT, plugin. That plugin is no longer supported by Google and I don't cover it in this course. You will need to install Java on your computer. I recommend always installing the latest version of Oracle's JDK, specifically the Java Standard Edition JDK.

If you're using a more recent version, you'll be prompted each time you open a new project to update the project to match your version of Studio. Android Studio 2.2 is based on IntelliJ IDEA, a popular Java IDE from JetBrains. You don't need to have IntelliJ IDEA installed. Instead, you get everything you need in the Android Studio installation. And that also includes the Android SDK. In this course I'll be working with Android 7.0, Nougat, which equates to API level 24.

I'll be talking about API levels and how they match up with Android versions early in the course. So you'll need the Java software and the Android software. And if you're new to any of the course skills that are needed by Android developers, including Programming with Java or XML, we have courses available that you can use to get up to speed with those skills. Finally, you need to test your application on devices. If you have an Android device, I recommend using it to do your testing. You'll find that it's generally faster and you'll get a more accurate sense of how apps will really behave in user's hands.

I recommend having at least one phone available with Android four or later. But if you want a more modern device, I recommend Android five, six, or seven. Virtual devices are free, so you can create as many as you need. They just take up disc space. So I recommend creating devices with a variety of versions of Android, and a variety of screen sizes and pixel densities.