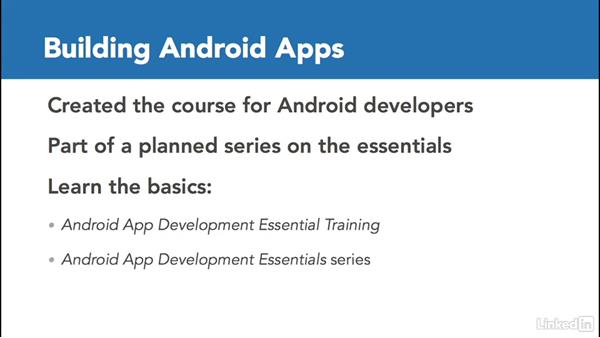 This course is designed for software developers who want to build applications for Android, and it’s specifically for developers who will be working with Android Studio. To get the most out of this course, you need to know basic Java and have some experience with Android Studio. This video describes courses you can watch to gain the required knowledge.

- [Narrator] This course is designed for software developers who want to build apps for Android, and it's specifically for developers who will be working with Android Studio. To get the most out of this course, here's what you'll need to know. First, you'll need to know basic Java syntax. You'll need to understand how to create classes, methods, fields, and properties, and other elements of the Java programming language. For most Android development you can depend on all of Java 6 syntax being supported with a lot of support for Java 7 and started with Android 7 Nougat you can use some of the new Java 8 syntax like method references and lambda expressions, with a bit of extra set up in your project files.

To learn about Java watch Java Essential Training. You'll get both an introduction to Java syntax and a tour of IntelliJ IDEA, the IDE on which Android Studio is based. I also recommend Java Advanced Training, where you can learn about interfaces and anonymous classes, concepts that are used a lot in Android programming. As I mentioned, this is one of a series of planned courses on developing for Android. But there are some essential concepts that you'll need to understand before working through this course.

You will need to know how to build very basic Android apps. You should understand concepts like activities, layouts, and intents. You should be able to program event handlers to handle and react to both user and system generated events. And you'll also want to be comfortable working in Android Studio, Google's dedicated IDE for Android developers. If you're brand new to Android look at the full course Android App Development Essential Training. You'll learn how to install Android Studio and the SDK and you'll get started with very simple Android applications.

And while this is the first component of the series that we're releasing, there will be a number of other courses that fill out the essentials series. And then you can learn more about Android Studio in Android Studio Essential Training. With this course you can learn about all of the tools that Google has added to IntelliJ IDEA to make it easy to build and deploy Android apps. This course focuses on working with data in Android apps, and one of the biggest subjects is relational databases, implemented with the SQLite database engine.

SQLite is a low memory footprint relational database that supports structured query language, or SQL. As you'll see in this course, you don't have to use raw SQL that much in Android because the Android SDK has so many tools that let you simply call methods. But there are times when you need to generate raw SQL queries. And so to learn more about SQL you can watch the course SQL Essential Training.

If you understand the basics of Java, basic Android development and SQL, you'll be ready to learn how to manage and display data in Android apps. Here's the software that you'll need on your computer. First you'll need the Java Development Kit, or JDK from Oracle. I always recommend installing the most recent version from the Oracle website, and you can get there through java.oracle.com. And then, of course, you'll need Android Studio. Android Studio is completely free and can be downloaded from developer.android.com.

This course was created with Android Studio 2.2. You should have that version or later to follow along with the exercise files. The sample apps that I demonstrate in this course target Android 7.0 Nougat. And the apps are backward compatible to older versions of Android all the way back to Android 4.0 Ice Cream Sandwich.