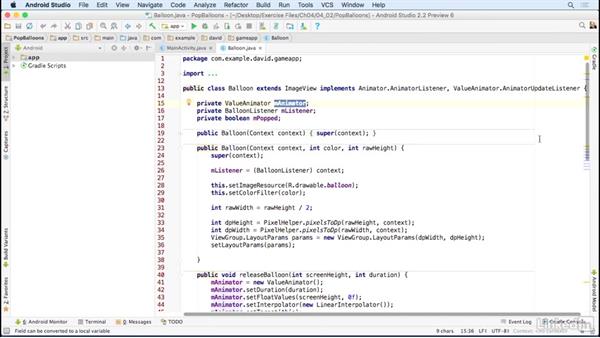 I’ve defined my animations and my levels, and now I want the player to be able to score points. In my game logic, you score a point by touching a balloon, popping it, before it gets to the top of the screen. I’ll start in the Balloon class, where I’ll listen for a touch event on the object itself. If the balloon object is touched, it’ll set an internal flag, and then it’ll send a message through a callback method to the main activity. It’ll be up to the main activity to handle the event, and take some action.

- [Tutorial Instructor] So far, I've defined my animations…and I've set up a way to manage my levels,…and now I want the player to be able to score points.…In my game logic, you score a point…by touching a balloon, popping it…before it gets to the top of the screen.…When it gets to the top of the screen,…it also pops, but there's a difference between it popping…because the user touched it,…and the balloon getting away from the user.…To implement this logic, I'll start in the balloon class.…The balloon class will listen for the touch event,…and when it happens, it'll send a message…to the main activity, letting the activity know…that this has happened.…