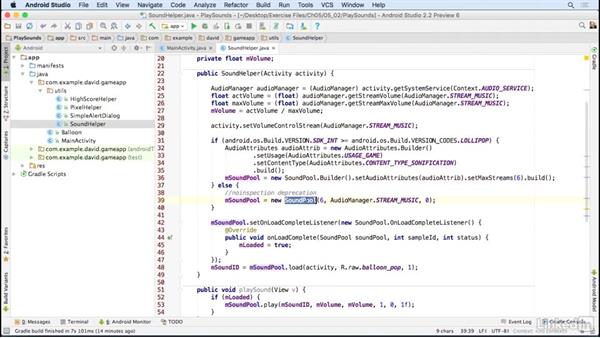 In addition to music, games frequently use sound effects to give a more realistic sense of the world the player is inhabiting. Sound effects are typically provided as very short audio files that are used over and over again as the game is played. This sort of audio file is best managed by an Android component named SoundPool. In my game, each time the player pops a balloon I want to play a popping sound. I’ve already copied my audio files into my resources directory, so now I just need the code to manage the sound.

- In addition to music, games frequently use sound effects…to give a more realistic sense of the world…the player is inhabiting.…Sound effects are typically provided as very short…audio files that are used over and over again…as the game is played.…This sort of audio file is best managed…by an Android component named SoundPool.…The SoundPool class works with audio files…that are no more than a megabyte in size…and they're stored in memory in an uncompressed format…to make them instantly accessible.…

Just as I did with my media player for music,…I'll put all the code to manage the SoundPool…here in my SoundHelper class.…But this will take quite a bit of code…so I created a gist and placed the code there.…Here's the URL to find the gist.…Git dot i o…slash v six u…fifty-six.…I've named this gist SoundPool code.…I'll select all of this code,…I'll copy it and go back to Android Studio.…

Then I'll replace my no arguments constructor…with the code I just copied.…I'll need some imports,…so I'll go through each of the classes that indicates…