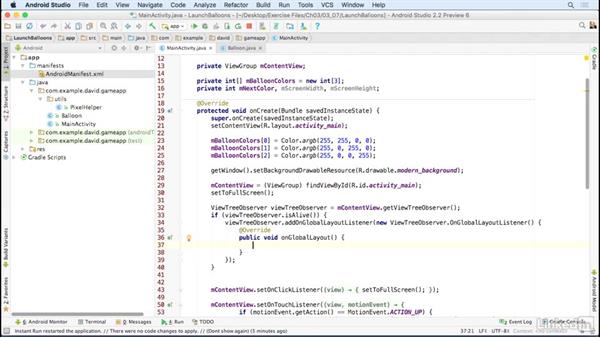 Now I'm ready to launch a series of balloons. Initially I'll only release a few balloons, but eventually my game app's screen will be filled with balloons. I'll use an AsyncTask for this job. This class implements its own background thread, making it easy to interrupt or cancel when necessary. I'll do most of my calculations in the background thread, and then override certain methods of the AsyncTask to launch balloons in the UI thread.

- [Teacher] So far in my Game project,…I've added code to the Balloon class…that will animate the object.…That is, it will make it move…from the bottom to the top of the screen.…That code is right now a little bit incomplete.…I've created the ValueAnimator object,…and I've set all of its properties.…But in order to actually make the balloon move,…I need to handle the event that occurs…each time that animated value changes.…That will happen here, in the method onAnimationUpdate.…

This method passes in a reference…to the ValueAnimator object.…And from there, I can find out…what the new Y position should be.…I'll explicitly reset the vertical position…of the object on screen by calling setY,…and then I'll call ValueAnimator,…and then I'll call getAnimatedValue.…Now notice there's also a getAnimatedFraction.…That's not what you want.…That will pass in a value representing…the percentage of the animation that's complete.…getAnimatedValue will give you the actual value…for that place in the animation.…

Notice, though, that it returns an object.…