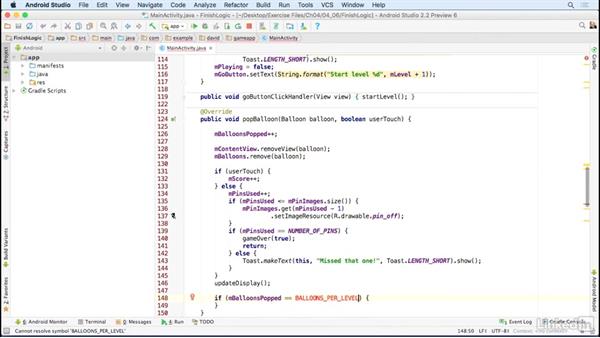 The last step in managing my gaming logic is to make sure only one level can be played at a time, and that I appropriately manage what happens when the user clicks the Go button. Right now its label says “Play game”, but I’ll need to update it as needed. There are 3 possible game states: mid-level, with balloons floating upward; between levels, waiting for the player to start the next level; and nothing, meaning the game hasn't started or it's ended and you're waiting to start again.

- [Voiceover] The last step in managing my gaming logic…is to make sure that only one level can be played…at a time,…and I also need to appropriately manage what happens…when the user clicks the Go button.…Right now, that button's label says Play Game,…but I'll need to update it depending on the game's state.…Over in Android Studio, I'm now working with a project…named Finish Logic.…As always, you can either work with this new project…or continue from the last one.…I'll start here by declaring a new field…called mGoButton.…

It will be an instance of the Button class…from Android.widget.…Then, in my onCreate method, I'll find the code…for I'm getting my widget references,…and I'll get the reference here…with mGobutton = findviewbyId,…and I'll pass in the ID of the resource,…R.id.go_button.…And I'll cast it as the Button class.…I also need to set up a couple of new Boolean fields…at the top of the class.…The first one will be called mPlaying.…

Its value will start off as false.…I'll switch it to true when I'm actually playing a level…