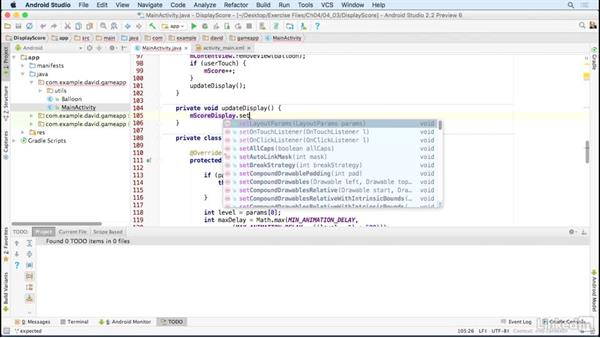 Each time the player pops a balloon before it gets to the top of the screen, they get a point. I already added TextView widgets to my app to display the current level and score; now I'll add some logic to display the score to the player as it changes. The score is cumulative for an entire game; that is, they'll keep adding to their score until they run out of pins or they stop the game on purpose.

- [Instructor] So far, I've added logic that allows me…to touch balloons and make them pop,…or get to the top of this screen and pop on their own.…I'm also keeping score internally, using this field mScore,…and keeping track of levels using mLevel.…Now I'm ready to display those values to the user.…My XML layout file, activity_main.xml,…already has text view components…that I'm going to use for this purpose.…I have one here for the level, and one here for the score.…I'll look at this in landscape mode so I can show you…what it will really look like.…

Now I'll add a bit of conventional code to the application…to get references to the text views,…and then set their values as needed.…Up at the top of the main activity class,…I'll declare a couple of text view fields,…and I'll name them mScoreDisplay and mLevelDisplay.…Then I'll come down here to the OnCreate method,…and at the bottom of the existing code,…I'll get the references to those fields.…With mScoreDisplay, and then I'll use findViewById,…and I'll pass in R.id.score_display,…