Configuring the developer tools for this course 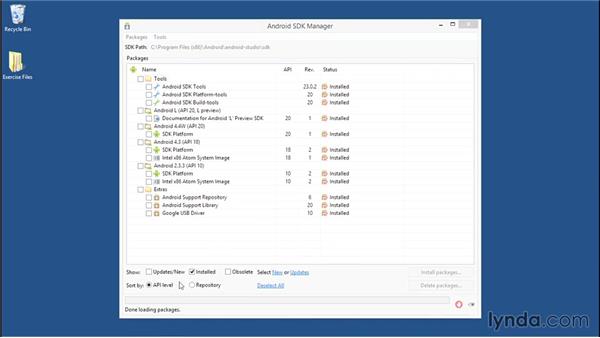 Join David Gassner for an in-depth discussion in this video Configuring the developer tools for this course, part of Building Adaptive Android Apps with Fragments.

You should see a link for your operating system. After you've installed Android Studio you can start it up. If you're working on Microsoft Windows, the first time you start it up you should run as administrator. On Windows 8 you can do this from the start screen and on earlier versions you can do this from the start menu. If you're prompted with the user account control click yes, and that should take you to the welcome screen. Now again, if this is the first time you've run Android Studio, click the link to check for updates and make sure that you're running the most recent version.

I'm running 0.8.2 and that's the most recent version as of the time of this recording. If you see a notification that there's a more recent version, click the updates link and follow the prompts to install the latest version. After updating Android Studio, the next step is to configure the Android SDK. On the quick start menu, click configure, and then click SDK Manager. If Android Studio's welcome screen pops up in front of the SDK manager like it did on my system, click on the background window to bring it to the foreground.

Now I'm going to show you which elements of the Android SDK I have installed on my system. You'll need at least these elements installed on yours. I'll uncheck updates/new so I'm only displaying the installed elements. In the tools section, you could have the most recent version of the tools and the platform tools, but you must have version 20 of the Android SDK build tools. This version of the build tools is designated in all of the sample apps. If you have options for Android L, the L-preview, you don't have to have the SDK installed, but I have installed the documentation for convenience.

You do need API 20 for Android 4.4w. That's the most recent production version of the SDK as of the time of this recording and it supports both conventional mobile devices, phones and tablets, and the newer wearable devices with the Android Wear SDK. That's the version of the API that I've used to target and compile my applications. Notice that I also have the SDK platform for Android 4.3 and 2.3 installed.

I've installed 4.3 because I'm building all of my emulators with this version. I'm not using Android 4.4 or KitKat for the emulators because the system images for that version of Android have a bug in them that I'd like to avoid that causes problems when you try to change the orientation of a device from portrait to landscape and back. That feature works perfectly in the Android 4.3 images so that's the version I'll use. Notice that I've also installed the Intel x86 Atom System Image for both 4.3 Jellybean and 2.3 Gingerbread.

These are the emulators that I'll use to test the apps throughout the course. In the extras section I have the support repository, the support library, and on Windows, the USB driver and that's all you need for the course. Now you can have other elements of the SDK installed on your system and it shouldn't cause any problems, but these are the minimal elements you need to follow along with the exercises in this course.

8/21/2014
One of the most common issues Android developers face is market fragmentation: the variations in screen size and pixel density among the thousands of phones, tablets, and even desktop computers that run Android. The Fragments API (introduced in Android 3.0) helps you deal with this issue. This course teaches Android developers how to program with the Fragments API, and build apps that work well on a wide variety of devices. David Gassner shows how to define different fragment layouts and add them to activities with XML or Java, create layouts for different screens and use a resource alias to select the right layout at runtime, and communicate between activities and fragments. He'll also show you how to make fragments work on older versions of Android, with the support library, and use fragments to display dialogs and preference screens.
Topics include:

Video: Configuring the developer tools for this course