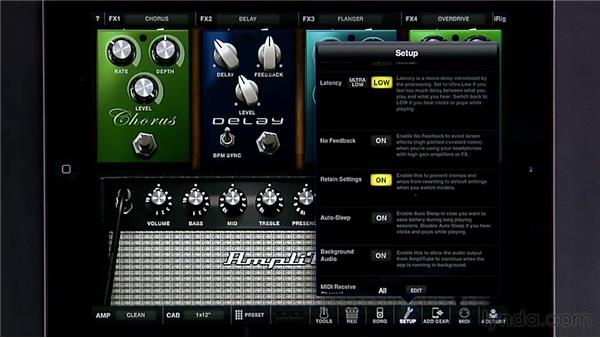 Join Garrick Chow for an in-depth discussion in this video Understanding other setup options, part of iPad Music Production: AmpliTube.

Now let's take some time and continue looking at some of the options we'll find under the Setup section of AmpliTube. Now we previously looked at the Level sliders and the built-in mic options. So let's just continue moving down the list here. The first item is Latency. Latency is when there's a delay between playing your instrument and hearing it through the app. Technically, all digital audio workstation apps have latency, but most of the time we're talking about fractions of a second that you won't really notice. Occasionally, though, depending on how much processing you're putting your signal through, you may hear latency. This is when you strum your guitar, but don't hear the signal coming through your headphones until maybe a moment later.

This can be annoying and make it difficult to play. By default, AmpliTube's latency setting is set to Low, and you shouldn't notice any latency most of the time. But if on occasion you think you're noticing a delay, try switching to the Ultralow setting. Just be aware though that this may introduce pops, clicks, and other unwanted noises into your recording especially if you have an older iPad. So if you hear any noises like that switch the setting back to Low. Next is the No Feedback setting. AmpliTube does an amazing job of re-creating the sounds of classic guitar amplifiers, sometimes so much so that it even faithfully reproduces the sound of feedback you might hear if you're using a high gain setting and standing by your amp without damping your guitar strings.

By setting No Feedback to either On or Auto, you'll prevent that kind of feedback from occurring, which can save your eardrums, especially if you're using headphones to monitor your playing. The No Feedback option disables high-pitched constant noise from occurring, but it also makes your output level a little quieter. So you might want to leave it completely off unless you're running into feedback problems. Just remember to keep your headphone volume low until you're sure you're not going to blast your ears with feedback. Next we have Retain Settings. Turn this option on so AmpliTube doesn't revert its amps and effects back to their default settings when you quit and reopen it.

I have found that even with this option off, your custom settings will remain for a while. But if you spend a lot of time tweaking knobs and dials to get the sound you want, you probably don't want to lose your work. So just make sure to come in here and turn on Retain Settings. Now one important thing to know what AmpliTube is that when it's open it stays open. So your iPad won't go to sleep in the middle of a recording session if AmpliTube is running. You have to quit AmpliTube be it either by pressing the Home button or putting your iPad to sleep manually with the Sleep-Wake button. But you probably also don't wanted to stay on when you're not using it especially if you're using a dock input accessory and can't keep the iPad charged while recording.

If you're the kind of person who forgets to put your iPad to sleep just turn on Auto Sleep. And with that setting on, the iPad will follow the auto sleep preferences you have set in your iPad system settings. So if, for example, you have iPad set to sleep after two minutes of inactivity, if you have Auto Sleep On in AmpliTube, it will also continue to sleep then after two minutes. The Background Audio setting is used if you want AmpliTube to continue playing music when AmpliTube isn't on-screen. For example, maybe you're reviewing a recording, but you remember you need to check email you received.

With Background Audio set to On, you can start playback and then switch to your email app to read your email and still be able to hear your recording. With this setting off, playback will stop as soon as you leave AmpliTube. Next we have MIDI settings. AmpliTube accepts MIDI input, which we're not going to get in too much in this course, but you might want to use this if you have something like a MIDI footswitch, which you can use to turn effects on and off or step through different presets. The last two sections here are FTP and SoundCloud upload which are used for exporting and sharing your recordings. If you have an FTP server, or website where you can upload files via FTP, you can enter your server settings here.

If you have a SoundCloud account, you can enter your username and password to upload directly to your account to share your music with others. I'll be talking about how to export your songs at the end of this course, but for now those are the items you'll find under the Setup section in AmpliTube.

12/20/2012
Join author and musician Garrick Chow as he introduces AmpliTube, a studio-quality app that turns your iPad into a mobile studio for recording a collection of classic and modern guitar sounds. After plugging in and configuring the necessary inputs and connections, the course shows how to use the built-in tuner to make sure your instrument's sounding its best, and keep in time with the metronome. Garrick then demonstrates how to choose the amp models, cabinets, and up to four stomp boxes to create your own unique tones, and work with the 8-track recorder's "reel to reel" interface during the performance. Finally, discover how to mix down and bounce out your song for sharing with friends, family, and other audiophiles.

Check out the rest of the iPad Music Production courses for more information on making professional-level recordings with your iPad.
Topics include: