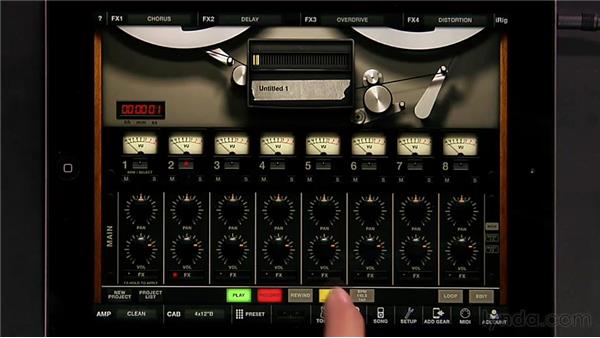 Join Garrick Chow for an in-depth discussion in this video Recording guitar in Recorder, part of iPad Music Production: AmpliTube.

Once you've purchased AmpliTube's 8-Track recorder, you are ready to start recording. Now I should make it clear up front that although this allows you to record up to eight independent tracks, this isn't a recorder that allows you to record multiple tracks simultaneously. You can only record one track at a time and then layer additional tracks on top of it in subsequent passes. So you can't, for example, record two people playing guitar at once on two separate tracks. You have to record one guitar track and then the other and then so on. And again, if you don't think you need multiple tracks, you don't need to buy the 8-Track recorder. A single track recorder that comes with AmpliTube will be fine if that's all you need.

Recording on AmpliTube is pretty easy and straightforward. To record to a track, the track needs to be armed. By default, the first track is already armed, but you can tap the arms select button on any other track if you prefer to record to one of those. But since we're just getting started, it makes sense to begin with track one. From here it's really just a matter of tapping the record button and playing the guitar. Now as I mentioned earlier if you're going to be recording multiple tracks, you probably want to use the Metronome to keep yourself in time. I've already set the Metronome to the Tempo I want for this particular song, and I'm going to have David come up here and play some guitar for us again.

Now we've already selected the guitar tone we want for the first track. I have the Crunch Amp selected, and I set the Dials, so I am going to go back to recorder. So now I'll tap record, I'll set the Metronome playing, and David can start playing when he's ready. (music playing) And we'll stop the metronome too.

So I tapped Play there to stop recording. I can also tap the Record button to stop the recording but the track would have kept playing. In this case, I just wanted everything to stop. Now to listen back to what we just recorded, I can tap the Rewind button. The Rewind button always takes you back to the last point you hit record which can be useful if you started recording somewhere in the middle of the song and want to avoid having to manually hunt for the beginning of the part you just recorded. And just so you know, you can jump to any point in the song by dragging your finger across the progress bar here. You can see the tape reel spinning there. But in this case I do want to go back to the beginning, so I'll just tap Rewind again.

So there's our first track, and as you can see, it's very easy to record in AmpliTube. Now let's add a second track. To do so I'm going to tap track two's arm button, and you can see it starts flashing. I don't want to pick a different guitar tone for this one, so I'm going to go back the guitar amps here. And it's going to be more of a Lead tone, so I'm going to the Clean settings. Maybe add some Delay and some Distortion. Could you play a little bit there? (music playing) I'm not hearing the Delay or the Distortion in this case, I need to could go back to the recorder, and I need to make sure the FX button is enabled.

And that will apply the effects of the stompboxes and the amps to the particular track. So now if David plays... (music playing) Now we hear the effects. So at this point we're ready to record. I've already rewound to the beginning, so I can just tap record, and we'll be ready to go. (music playing) [00:04:016.35] Okay, so there's our second track. It's not too bad. Let's give it a listen back. I am going to rewind again.

(music playing) That's not too bad, although at the end we probably could fix a little bit at the end there. Now unfortunately, it's pretty easy to fix mistakes since AmpliTube supports punching in. Punch-in recording involves playing along with track you recorded and then tapping or punching the record button at the beginning of this section you want to replace.

Now the downside to this in AmpliTube is you pretty much have to have a second person there to tap the record button for you while you're playing your guitar, because recording starts as soon as you tap the record button and overwrites what was previously there. So I'm going to roll back a little bit just by dragging here. All right, so now I'm going to tap Play and David is going to play along with the track. And when we reach to the point we want to fix, he'll keep playing, and I'll tap the record button, and we'll just record out through the end. (music playing) Okay, I think that was better.

Now it's very important to listen back when you've done a Punch-in recording to make sure no unwanted noises like pops or clicks were introduced into the track. Now if necessary, you can adjust the mix between the two tracks using their individual volume knobs as we've already seen. You can also pan each track to the left or right, which might make them easier to hear. So I'll just rewind and listen to a little bit of this. (music playing) And as you just saw, when I tapped Rewind, it took me back to the last place I hit record so we were able to review that Punch-in point.

Now if you want to listen closely to a certain section of your song, you can utilize the Loop button. This lets you set an In/Out point so you can focus on a specific area of your song. Basically, the way this works is you can play through your song. Tap the In button at the point where you want to looping to begin and tap the Out button when you want the looping to stop. (music playing) So with those loop points set, I can now hit the Loop button, and we'll just hear that particular section.

(music playing) So we can see it looping back in the playback area there. This is really only for listening back, though. Notice with Looping On, the Record button is disabled, but looping a section can come in handy when you are trying to make sure your performance was recorded the way you intended. Now if we had more parts we wanted to add, we can just arm track 3 and start recording again, and we could go all the way up to 8 tracks. But in this example, I think that's all we wanted to capture.

And that's how to record multiple tracks in AmpliTube.

12/20/2012
Join author and musician Garrick Chow as he introduces AmpliTube, a studio-quality app that turns your iPad into a mobile studio for recording a collection of classic and modern guitar sounds. After plugging in and configuring the necessary inputs and connections, the course shows how to use the built-in tuner to make sure your instrument's sounding its best, and keep in time with the metronome. Garrick then demonstrates how to choose the amp models, cabinets, and up to four stomp boxes to create your own unique tones, and work with the 8-track recorder's "reel to reel" interface during the performance. Finally, discover how to mix down and bounce out your song for sharing with friends, family, and other audiophiles.

Check out the rest of the iPad Music Production courses for more information on making professional-level recordings with your iPad.
Topics include: