Modeling a simple shape with a primitive 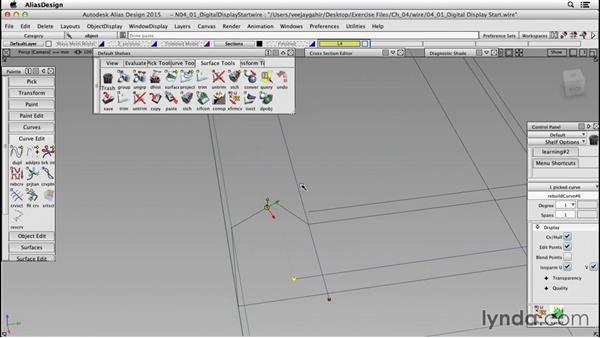 - OK, so in this video, we're going to take a look at how to create a Digital Display. Now, typically this would be a carryover part or off the shelf part, but I'm just going to go through the exercise of creating some surfaces for this. It's a very geometric part, there's not a lot of organic surfacing at all in this, and again, there's many different way of doing this: you can start with a primitive and scale, and then start adding some chamfers, or you can go straight to curves and then from curves, create surfaces, or you can use a combination of both. So I'm going to show you the method that I use to create this, and it's essentially a curve method, and the reason for that is that the chamfer that you see down this edge here and the chamfer that you see down this edge here are slightly different values, so running a chamfer round a primitive wouldn't work in this case, so you'd have to do a little bit of manipulating.

So, let's just go with a very basic exercise of how to do this, so let's create a new layer, and we'll pull up the sections here, and first thing thing to do is create a very simple entity between this edge and this edge here, and I want to set the pivot along there, and let's just make this a 1, it's a straight line. So let's pick that entity, and then we're going to move all the way down to this corner like that. Let's do a copy, paste, and we're going to move the pasted version all the way down to this corner down here like that.

Let's go to this view here, and at this point here, I'm just going to go cue, and let's just pull these up to the very top like that. Now, you probably will have exact coordinates for this if you had a engineering drawing, but for now, we're just going to follow this section of scanned data. So right now, what we're going to do is go ahead and just Create a Duplicate Curve from there and I'm going to go ahead now and move this Curve over, like so.

Okay, let's do the same for this edge down here, so we can go ahead, Duplicate, and in this view here, let's close this down, we're going to Move it over like that so it hits the peak, and at this point, we're going to snap the pivot point to the middle right there. Let's move it over a little bit so we can get really close to it.

There it is, right there. Okay, so that's the midpoint, and again, what we'll do now is we're going to reflect it in the X direction. Okay, let's take those Sections off, let's go into our TOP view, and very quickly, now, let's just trim this up. Same on this side.

Let's bring our Sections back. Now at this point, I'm going to go back into this view. Let's go back to that Draft, Q for Query edit, open that Draft up, and I want to drop this Draft now down to this level here, like that. Let's go to this view here. So what we've done now is we've dropped it down to the outside corner, which is this corner here.

Now, we're going to take this edge, let's copy and paste that, and I want to set the set the pivot right to this point here, and then I'm going to Move down to the bottom like that. And I can paste again, set the pivot, and then Move to this side over here.

So all I'm doing here is creating a very basic wireframe. OK, let's take the Sections off and then see what we have. So now we should have the inner portion. Let's do a quick trim again. So let's go ahead and grab everything and switch off the the Cv/Hulls. Okay, so we've created, essentially, a very basic wireframe, and now it's a very simple case of just skinning this surface. So the first thing is, let's go ahead and planarize this centerpiece.

We can set Planar. So we've got a slight error here, it's basically saying there's no closed region found. So let's do this, let's take this data and let's just analyze it really quickly. Hide everything. Let's go into our TOP view, and let's see what the problem is here. We're going to go into this view here.

Take all those control points, and I'm going to exaggerate the vertical scale using this option here. So what I'm looking for is any road point that starts to move away from the horizontal... It's not looking too bad there, but what I can do here at this point is I can put my Grids back on, so I'm not right on the grid, so that's okay. Let's go back into the Top View, Reframe, let's try that again.

Let's try to do a Surface, Set_planar, closed region not found, okay. So, we still got the problem again. So let's do this: let's take these two surfaces, and we're going to take this and this one, delete those. And, we're just going to put two brand new curves in like this. The difference was very, very slight, probably. At this point, this should work quite nicely.

There we go. Okay, let's bring back the rest of the data there, and let's do a Skin now between some of these chamfers here. So, Surface, Skin, no proportional crown, obviously, we don't want to have any of that, and we're going to use the Curve, Curve. Curve, Curve again. And in this case, we're going to go with this one, Curve and the outside edge, Curve and outside edge again.

So, if I shade this up, you can see we've created this corner like that. So, let's see what we have to do on this side. Okay, so let's go back to the Skin command, shade that, that looks good. And finally, we've just got this portion to do here.

Curve, Curve, one more time like that. Okay, let's take off the locators, and we're going to just change the patch precision down to zero on that, pick Component, we're going to pick Curves, take all those curves, make them invisible. So, the final check here would be to do a quick stitch on this. Move it up, and we should only see one bright yellow edge along the bottom edge, which is fine.

And, let's do a quick NURBS to Mesh. Now, we could tighten up the Tolerance here, because it's quite a small part, we could use 0.01 if we had to, and let's bring back the transparency so you can see that mesh on there. Move that up, and finally, let's do a mesh repair, and you can see that it passes everything and we only have one open edge here, which is this bottom edge. So, again, a very simple geometric part, probably a dozen different ways you can do this, and that's just one of the ways I've used. 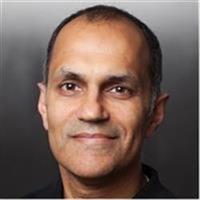 8/13/2015
Picking up where Modeling an F1 Wheel in Maya left off, in this course Veejay Gahir walks through the steps required to surface a Formula 1 wheel in Alias. With assets from the previous course, you'll be able to complete the entire project, from setting up your Alias model and building high-quality surfaces for the different wheel components, to exporting data for use in rapid prototype physical models and rendering the final product.
Topics include:

Video: Modeling a simple shape with a primitive