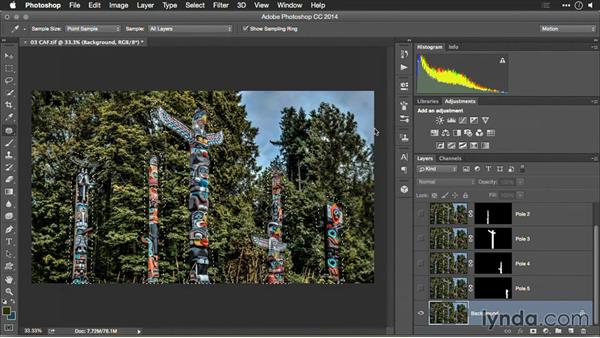 Join Richard Harrington for an in-depth discussion in this video The technique explained, part of Motion Control 3D: Bringing Photos to Life in Three Dimensions with After Effects and Photoshop CC.

- So what exactly is Motion Control 3D? Well, it's a process that combines several techniques, and it means that you need to master both Photoshop and After Effects. Not completely, but a good core set of skills. Essentially, it all starts by choosing pictures and then we'll move around inside of those pictures in a 3D environment. You're gonna select images that have an adequate resolution, typically two to five times the resolution of your delivery screen. So think about things like 1920 by 1080 or 720p, or if you're delivering to feature film.

Once you have those high-resolution images, you need to prepare them. Essentially, what's involved is you're gonna look for images that have enough resolution and a sense of perspective. That perspective will then be brought to life. You'll start with a process that's relatively linear. You'll bring the images into Photoshop and do any necessary color correction or general enhancement for tonality. Once that's done, you need to start splitting things into layers. And this all starts with making accurate selections. Once you have those selections, you'll typically apply them as a mask to individual components within the photo.

Now, of course, once you've cut something out, you'll need to fill those pixels in. And fortunately, some of the additions inside of Photoshop, along content aware as well as cloning, make this task a lot easier, and we'll explore those in depth. Once the photo is cut up and with named and organized layers, we'll bring that into Adobe After Effects. You're gonna take that layered Photoshop file and expand the layers along the Z axis, essentially adding depth to the image. Once those layers are expanded and scaled to create a sense of looking through the photo, the 3D camera can be animated.

Because the layers are spread out in 3D depth, it leads to a good sense of parallax, and this creates subtle motion. We can also enhance things, adding key frames to position the camera, using ease and velocity for a sense of movement, and even enhancing the scene using lights or particles. Once that's all done, it's just a matter of rendering the files out, and then they can be handed off to other applications, such as a video editing tool or even posted directly to the Internet. Now, this process does require you to use both Photoshop and After Effects.

I'm gonna walk you through all of those steps, but feel free to either rewatch a movie if it's a technique that's very new to you or check out some of the additional training to really supplement your skills.

1/29/2015
Have you looked at a photo and wished you were there, or wondered what the scene looked like to the photographer? Now you can bring your photos to life by adding motion and depth to your images. Author Rich Harrington reveals how you can transport your photos into a three-dimensional world, using Photoshop and After Effects CC. The course shows you how to select the right images and resolutions, how to use masks and layers to build the composition in Photoshop, and how to animate the camera and light the scene in After Effects. Plus, learn how to use particles to add depth to your scene, mix in video, create 3D perspective, and render out your composition.
Topics include: