An introduction to cloning 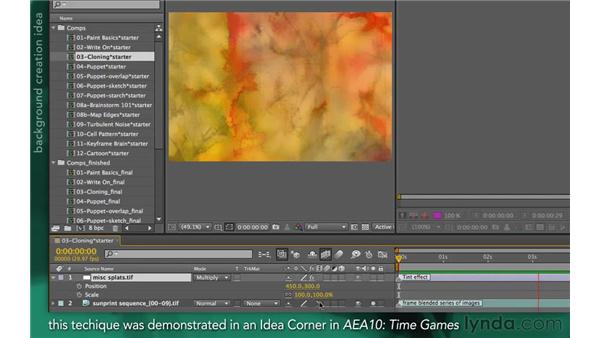 Join Chris Meyer for an in-depth discussion in this video An introduction to cloning, part of After Effects Apprentice: 13 Paint Roto and Puppet.

If you're familiar with cloning in Photoshop, the Clone Stamp tool in After…Effects works in a similar fashion.…It samples pixels from one part of a layer and copies them to another part.…If you are still following along, I have closed the Compositions from…the previous movie.…If you have the project file, open Composition 03-Cloning*starter.…We have two layers in this composition.…The first layer, miscellaneous splats, is just a series of marks we made with…India ink and then we scanned it in and applied the tint.…

The second layer is a series of watercolor images.…If I turn off Frame Blending, you can see that it's a series of images that have…been sequenced together.…These are sections caught from a larger image.…When Frame Blending is enabled and you RAM preview, you can see the images…are blended together.…This is an inexpensive way of making interesting backgrounds.…To practice using the Clone Stamp tool, we will concentrate on layer number 1.…So let's double-click it to open it in the Layer panel.…

Video: An introduction to cloning