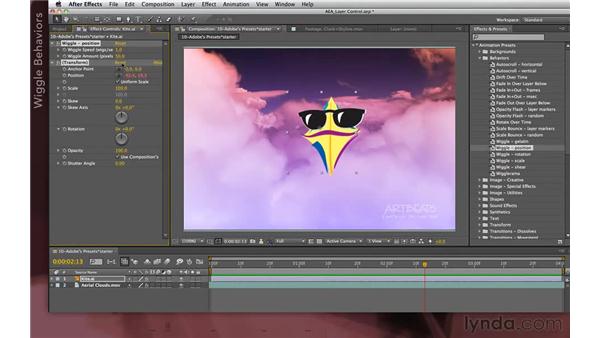 As I mentioned before, presets are not all about effects by the way. For example in the exercise files I've got an additional layer called Kite. Now I'll go ahead and turn that on. There is your friendly little kite still image there. Let's say I want him animate. Well, I can animate him by hand or I can try out an animation preset. One really fun category present in here is called Behaviors. Behaviors create automated self-animating motions. For example, if I want the kite just to drift over time, I can either double-click this present or drag it directly under the kite. 0 to RAM preview.

Now when I RAM preview, you'll see that he's automatically bouncing around in the wind without me having to do any keyframing. This can be very helpful and quite expedient. He's not moving enough? I'll just turn up the Wiggle Amount. I'll turn up the Wiggle Speed. Be careful with this parameter. A little goes long way and then we will RAM preview again. Now he's buffeted around quite a bit more. In addition to these individual Wiggle presets, there is also Wigglerama, which include a whole bunch of different parameters all in one.

So I am going to undo back to where the preset is no longer applied. Double-click Wigglerama. Now I've got speed, nervousness, basically how edgy the movement is, and then separate controls for how far he's wiggled in position, how much he's wiggled in rotation, how much he's even done inside scale. RAM preview and now the kite is bouncing around a lot automatically without me having to do any keyframing. So you see why I like these behaviors. They give some really nice instant gratification movements.

There are some automatic Fade-Ins and Fade-Outs, which are very useful, things that automatically flash, things that automatically cause layers to bounce. There are various sorts of presets here. And as with the effects, you don't have to leave presets at their defaults. You see how we've been editing these parameters. Now the really nice thing about animation presets is you don't have to rely on the ones provided by Adobe. You can create and reuse your own presets and that's what I'll show in the next movie.