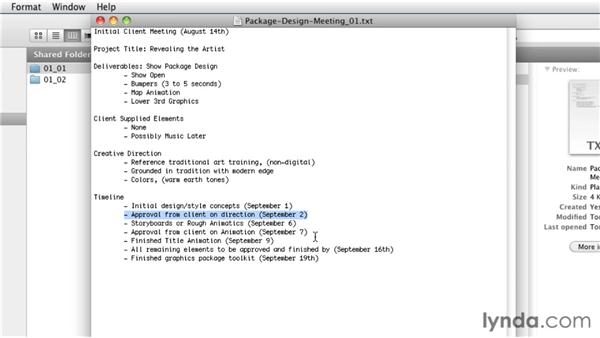 Join Ian Robinson for an in-depth discussion in this video Workflow for creating motion graphics, part of After Effects: Principles of Motion Graphics (2011).

Even though it's safe to say there is no single roadmap for creativity, there most definitely is a method to the madness when it comes to creating motion graphics. It can usually be broken down into roughly four or five phases. Now, to illustrate this point, I'm going to go ahead and navigate to a folder structure that I created in our exercise files. Now, don't worry. If you don't have access to the exercise files, just follow along. I just think these illustrate the point extraordinarily well. So if you look in your exercise files, in the chapter 1 folder, you should find a folder 01_01.

Let's start by looking at the 01_Start folder. The first phase is the initial client meeting. Now, in that meeting you want to create some notes that actually give you a direction to work with. So if we just look at our notes here, you want to obviously notate the date, the project title, and then--this is really important--the deliverables. You want to know exactly how many graphic elements you have to deliver, and you want to notate as much information about these elements as possible.

For example, I listed show open. Now, most of the time the next question should have been, do you want a 30- second open, a two-minute open? Do you want like a tease? Do you want just a quick reveal? What exactly are you looking for? But sometimes you won't be able to get those details in the initial meetings. So overall, it's just important to get your list of deliverable elements. Now, the next thing down, client-supplied elements. This is where you'd want to list any logos or music elements that the client may want you to incorporate into the project.

Next thing down, you should notate a creative direction. By all means, talk to your client and see if they can actually verbally tell you exactly what they're looking for on a creative basis. Now, I notated this using some language that I would understand, but obviously if you're not quite sure exactly what I mean by "Reference traditional art training," or "Grounded in tradition with a modern edge," don't worry about it; just use your own language when you notate your creative direction. The most important thing out of the client meeting is going to be the Timeline.

Now, the Timeline will determine the schedule for you to deliver your elements, but it's really, really important to actually put the client on a Timeline, because when we deliver our initial design concept, if they don't get approval back to us in a timely fashion, we can't really turn around the animation in a timely fashion. So make sure when you get the Timeline, yes, you'll have a Timeline of the projects you have to deliver to them, but you want to get a Timeline from them as far as when they're going to get you final yea or nay approval.

So let's go ahead and close that out there. The next phase after the meeting is the research phase. Now, in the project we'll be working on later our client wanted us to create something that reflected traditional art skills. Now, this is something I really want to encourage a lot of you to explore, creating artistic elements outside the box, meaning not within the digital world. Now, even if you don't have an artistic bone in your body, by all means talk to any artist friends you can. See if you can contract some work.

That way you'll have some other elements that can kind of help push you in a new direction. You can also use this Research Images folder to download images that you might use for inspiration. The thing I want to warn you about when you're downloading images from the web, obviously you want to be aware of copyright. So if you're downloading copyrighted images just for inspiration, make sure to save those off into a separate folder so you don't accidentally use them in your project. You'd never want to do that. Now, once you've got a clear direction as to where you're headed, it's time to actually start working.

This is when you want to start creating project files out of Illustrator or Photoshop or After Effects. During the working phase, you'll actually want to enter the next phase, which is approvals. So as you're working you want to generate still images that you can send off to the client for approval. The key is to not spend too much time going in one creative direction without finding out from the client, hey, is this the direction you're actually looking for? So the last phase I want to talk about is when you're finished with your project.

You'll want to create a folder where you can render all your deliverables, like the finish title open video, or the lower third graphic you created. Save that off into a separate place and then by all means archive your project. Archiving your projects can save you valuable time and actually help generate a little bit of money because you'll save other elements that you've created during the process for use in future projects. So to recap, the five phases that you'll be looking at when you're creating motion graphics are the initial client meeting, exploration, approval, design, and archive.

So as you can tell, I'm a big fan of the process, and it's these five phases that encompass just about any motion graphics project.

2/9/2011
After Effects: Principles of Motion Graphics with Ian Robinson covers some of the core principles used to create motion graphics, breaking them down into smaller groups of applied techniques in After Effects. The course explores everything from gathering inspiration to integrating traditional typography, transitional elements, animated textures, color, and more into motion graphics. Instructions for building a toolkit with templates and a style guide for future projects are also included. Exercise files accompany the course.
Topics include: