What is CINEMA 4D Lite? 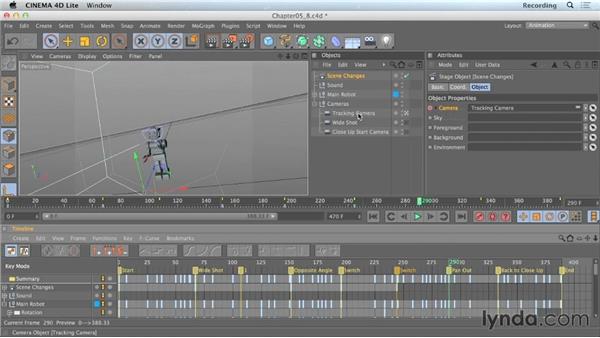 After Effects CC includes new integration with Cinema 4D allowing you to import Cinema 4D files from Cinema 4D into After Effects. This allows you to create new 3D elements for your motion graphics projects. It also gives Cinema 4D users an easier way to perform post production And add visual effects to the 3D scenes. After Effects also comes bundled with Cinema 4D Lite. And you can see that exists in the plugin folder, MAXON CINEWARE AE, CINEWARE Support, Lite, CINEMA 4D Lite.

That's on the Mac. On the Windows version, it will be in a similar location. And Cinema 4D Lite is essentially a cut-down version of Cinema 4D, but it has a surprisingly extensive feature set. Enough tools to keep motion graphic designers happy. This course is designed for After Effects users who want to get their heads around Cinema 4D Lite. And learn how to make the most of the new software that's fallen into their laps. Cinema 4D offers a wide range of modeling features.

You can start by building models from primitive objects. The user friendly interface allows you to express yourself easily and navigate with ease as you build 3D models. Spline based modeling is also available and these splines can be brought to life with nerbs. These can be used to extrude text and other shapes. Sweep shapes and apply in boston relief textures to the surface of objects. Cinema 4D Lite also has a wide selection of deformers that can bend, twist and reshape your models in lots of interesting ways.

CINEMA 4D's power animation system, provides you with a huge amount of control, both in keyframe mode, and F-curve mode. Import audio, and match keyframes to pertinent moments, or use Espresso to automate the animation process. There's also a powerful pivoting system that will link objects together for hierarchical animations. Cameras and lights can also be animated, and then exported to After Effects via the Cineware plugin. Once you finish modeling and animating, you can bring your scene to life by applying textures and materials that can reflect and that light.

And even animate of their own accord. Cinema 4D Lite comes bundled with lots of presets to help you get started with materials, as well as lighting setups, cameras and other models for your scenes. The integration with After Effects isn't just limited to adding 3D text to a scene. You can track cameras in After Effects using the powerful 3D camera tracker. Then bring the entire 3D scene from Cinema 4D Lite. And it will be matched to those tracked cameras in After Effects.

The Cineware work flow allows jumping back and forth between applications to tweak and adjust your projects without the need to render. You can even add object buffers, name them in Cinema 4D Lite and have them show up with exactly the same name in After Effects. That alone is worth the upgrade to After Effects CC. You can also access multipass channels from Cineware, allowing you to isolate objects, materials, reflections, shadows, depth of field etc.

And individually treat these elements within After Effects. Powerful multipass compositing without rendering is now possible. And Cinema 4D layers are also supported, making it as easy as pie to color correct individual elements from a Cinema 4D scene. In the workshop, we'll build two entire scenes from scratch, using the modeling, animation, and texturing tools included. These will be motion graphics projects for an imaginary TV show called Club Robot.

We'll also learn how to take these 3D scenes into After Effects, for color correction, multi-pass compositing, and visual effects work. (MUSIC).

Video: What is CINEMA 4D Lite?