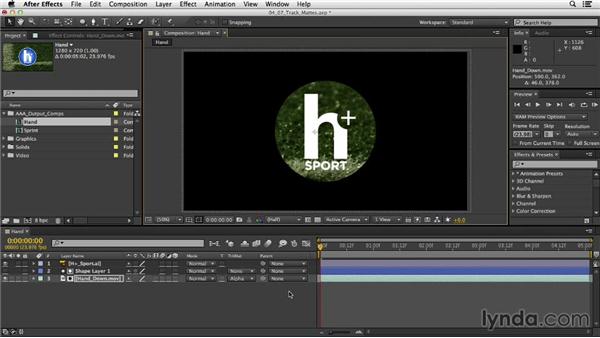 The easiest way to think of track mattes is to think of them as stencils, or cookie…cutters. You can use the transparency of one layer…to determine the transparency of another. So to show you what I mean, let's go down…to the bottom of the Timeline panel and the second button from the left in the…lower left corner, make sure that's Enabled.…That'll enable our modes and our track mattes.…Notice layer one doesn't have an option for track mats.…That's because track mats need to reference the layer above in order to…enable a track mat. So for example, let's select layer three.…

I want to use the transparency of layer two, which is this circle to determine…exactly how much of layer three I would like to see.…So, if you go to the track mat pull down for layer three.…Click on the word None and choose Alpha Matte.…With alpha mat looking at the alpha transparency of layer 2.…Now there are a couple of other track matte options.…Let's look at alpha inverted. Of course, that just does the exact…inverse. Now luma matte is interesting because it…