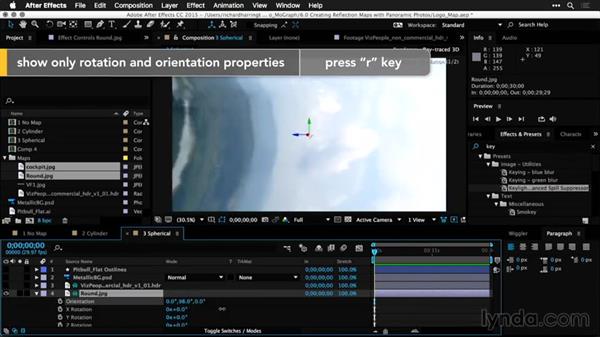 - Let's take a look at a different type of panoramic photo. In this case, I'm going to take one that's mapped to a more 360 view, rather than a flat view. And we'll use this to create lighting in the scene. This particular image comes right from a cell phone. That's pretty easy to use. Let's open up Comp 3 and we'll rename this, 3 Spherical. And make sure it's open. Here's a couple of ones that I made using a companion app.

This is a 360 degree that had a floor and a ceiling. In this case I used Occipital, which is a great app available for smartphones. And it allows you to map these into pretty cool environments. I also have one here from VizPeople. You can visit their website and they have many of these available for sale. These are great options here, and this one is provided for demonstration purposes only. So please don't use it in a paying project. If you take these and place these into your environment here, you can right click and make that into an environment layer.

And let's put those other ones in there as well. Environment Layer. If you don't see Environment Layer as an option, when you're working remember to check your Composition Settings. From the Advanced tab, you'll need to use the Ray-traced 3D renderer. Click OK and let's take a look at each of these. Here's that cockpit.

And you'll notice that it wrapped it into a sphere. So if we adjust that, we could start to look around the inside of that cockpit. Which is pretty cool. Additionally, you'll find that you have the ability here to tweak the orientation to set an initial starting point, or actually adjust the opacity for the strength. Let's set that to only appear in reflections.

Here's the next one. This is at 360. And let's press r here and just adjust the orientation. And you see that it's not exactly photo realistic, but this is still pretty useful. I could orient that, so you better see things. And there's our environment of clouds and sky. Again, twirl that down if needed, and tell it to only appear in reflections.

And here's that last one. Because this is a perfect spherical, and a very high res file, I like the ones from the cell phone. You'll notice that you have a lot of flexibility here to move around the environment. And again, only appear in reflections. Alright here's that logo, and the background. And let's see what the different environment maps do. Not too bad. Let's adjust the orientation of that one slightly, and you see that as it adjusts, the environment map redraws and the reflections take on different properties.

You might find that rotating it will give you different looks. And you can play with what's being shown on the reflective surfaces. Let's drop that to Half quality so it's a little more responsive. And you still get a pretty good idea of the reflections. Here's that other one that had skies in it from the top of a mountain.

And again, you could adjust the orientation or rotation to change its behavior. And then let it redraw to see the results. I like that one. There's the brighter skies reflecting. Or here's that cockpit from inside of an airplane. This is an old World War II bomb. And again, by adjusting the orientation, you can decide what part of the image is reflecting.